Police patrols will be increased around temples and synagogues for the Jewish High Holy Days. 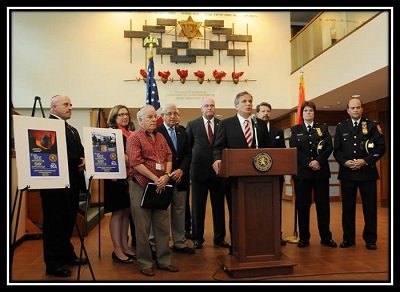 “The County will intensify police patrols around temples and synagogues during the upcoming Jewish High Holy Holidays,” said County Executive Mangano. “All religious leaders should know that the Nassau County Police Department will take any and all threats to public safety seriously as nothing is more important than the safety of our residents.”

Police officials say there has been no specific terrorist or hate crime threat made to Nassau County, however, County ExecutiveMangano reminded residents that if they “See Something, Say Something” to the Nassau County Police Department.

“In these dangerous times, it is critical that we all be aware of our surroundings and Nassau County’s “See Something, Say Something” initiative is a great way to raise awareness of such dangers and protect our citizens,” added County Executive Mangano. “Residents can help be the eyes and ears for the police department. Don’t assume a package, bag or box was left somewhere by accident. If you see an unattended package, at or outside of a church, temple, train station, synagogue, mall or high traffic area – or if you see anything suspicious, report it. Let the police know. Dial 911. If you are unsure about something, or your gut tells you something may not be right, call our Nassau County Police Department tip line at 516-573-7720.”

Police intelligence officials will use information they’ve gathered from various crimes over the prior years to pre-determine where criminal action may occur and take the proper precautions by assigning resources accordingly. Nassau Police Department’s Intelligence and analysis unit has become a model for police departments around the country, he said.

Nassau Police Commissioner Dale stated, “Last week the County Executive brought together Jewish leaders and the precinct commanders for their particular areas to establish or re-establish a better working relationship ahead of the holidays.”