"Nothing is going to mimic real life exactly so you have to kind of put your own thoughts into it and artistic impression into the ice," explained Mastic Beach High School teacher Rich Daly, as ... 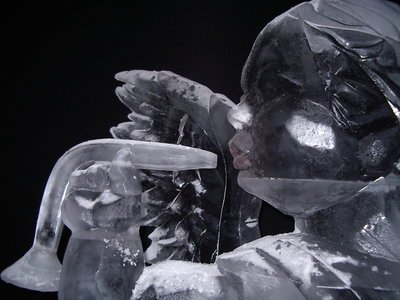 MASTIC BEACH, N.Y.—“Nothing is going to mimic real life exactly so you have to kind of put your own thoughts into it and artistic impression into the ice,” explained Mastic Beach High School teacher Rich Daly, as he masterfully carved a seahorse out of a 300-pound chunk of ice before his audience of 17 rapt students.

“It’s really impressive what you can do with a small amount of tools and some ice,” said Jose Freire, 16, a student looking on.

Daly, 33, a Johnson and Wales University graduate who taught home and careers course at William Floyd Middle School for ten years, was assigned by district officials to head the high school’s new culinary arts program that launched this past fall.

Along with learning how to prepare various dishes, soups and stocks, Daly’s students also cater events at the high school. During their senior year, they will face the challenge of creating their own unique ice sculpture.

“They are going to get their own 300-pound block of ice…use the chain saws and really go to town on it,” Daly said. “You start with a rectangular block of ice and it could become anything.”

“I’m kind of nervous because of all the ice that was flying around, but I can live up to it and I can do it,” said Kaitlin Deliver, 16, a student onlooker.

“It’s tradition…it’s the centerpiece of the buffet…whether it’s fruit carvings, ice, butter carvings, whatever it may be. It’s important because of the artistry that’s involved. It just helps make the event that much more special, Daly commented.

But William Floyd High School is not the only place Daly is creating a buzz. For over ten years, he has been carving magnificent ice sculptures for catering affairs through his business, Ice Melodies, and competing professionally as an ice carver.

The current record was set in 2002 by Rich Bubin, of Pennsylvania, who, according to Ken Diederic, executive director of the National Ice Carving Association, carved 61 ice blocks in 4 hours, 22 minutes and 55 seconds.

Daly’s goal is to carve 75 varied ice sculptures in four hours or less. If he succeeds, he said, “I will have that record forever.”

His students are eager fans in full support of Daly’s aggressive goal. “He can do it,” said Deliver. “We’re going to be so proud of him when he does.” “Maybe when we’re older, we can beat his world record,” she added.

Post your thoughts and comments about this article below or on our Long Island Living Discussion Forum.