Dr. John DiMarco of Massapequa is the inventor of MyStretchBar, which helps build flexibility through assisted stretching without a partner. 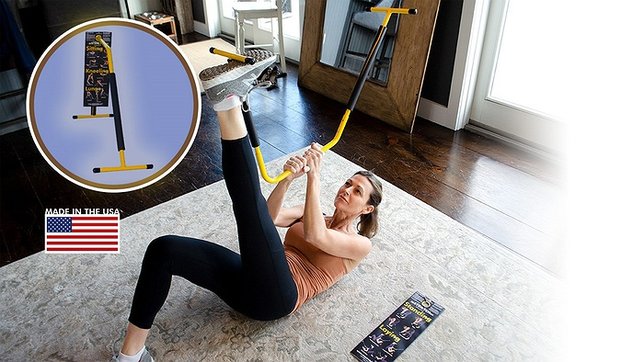 We’ve all been there…that stiff feeling when we first get out of bed in the morning, or that tightness in our backs and hamstrings that serves as an excellent excuse not to go for that afternoon walk around the block. Stretching and the flexibility that comes with it can be one of the single most important aspects of a body’s well-being – one that is sorely neglected by most people – but one Long Islander has come up with a new product that can help easily incorporate it into your daily routine.
Dr. John DiMarco of Massapequa is a Professor of Digital Design at St. John's University in Queens, and the inventor of MyStretchBar – which helps build flexibility through assisted stretching without a partner – when he began noticing that he wasn’t bouncing back from his busy lifestyle as quickly as he was used to. 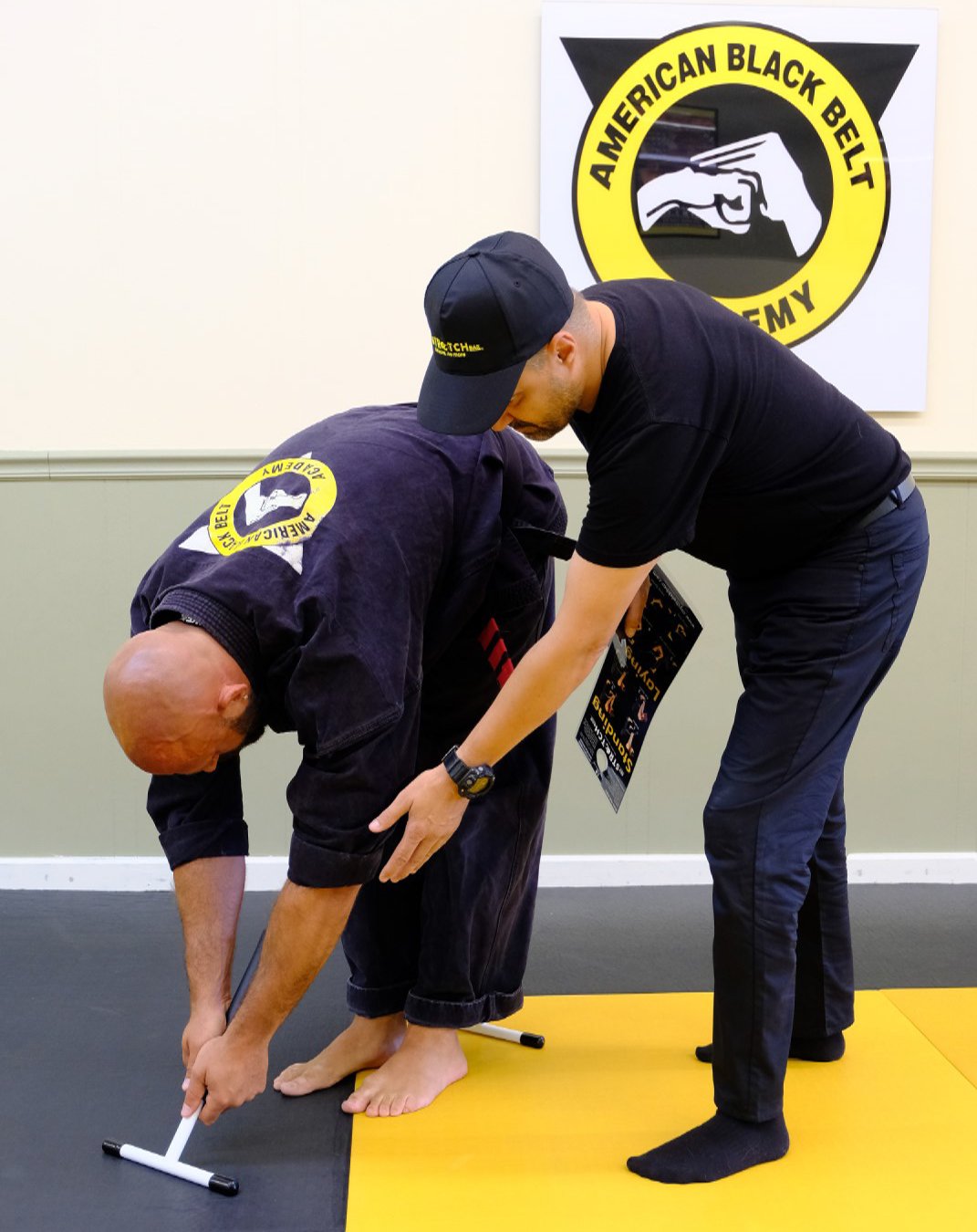 MyStretchBar founder and inventor, Dr. John DiMarco, Ph.D. guides American Black Belt Instructor Lovarco through a perfectly controlled standing stretch using MYSTRETCHBAR to target the hamstrings and lower back area. Photo Credit: Lindo Skoda
“I originally started developing prototypes because my back was starting to get sore,” he said. “I'm running around to classes, I'm an active dad, I play golf, I'm walking the dog...I'm just doing lots of different activities, and when I hit my 40's, I found out was sore all the time. So I started working on MyStretchBar with an invention coach.”
After a great deal of designing, effort, trial-and-error and perseverance, MyStretchBar has now been perfected, DiMarco said, and is now ready to enter the fitness, wellness, and sports markets.
"I'm a PhD, but I'm an information scientist, not a medical doctor, so I had to seek out experts. I needed feedback and validation," he said. "I went to a local medical supply store and a karate school in Massapequa, and I had the owners try it out. They liked it so much that they both began offering it for sale at their businesses."
MyStretchBar is a product of the USA, proudly made right here in New York and patent pending. And after finalizing the design and manufacturing it, DiMarco said that he’s just now starting to test the waters as far sales options go. Currently, two locations in Massapequa offer MyStretchBar; All American Medical Supply of Massapequa, and American Black Belt Academy in Massapequa Park. However, if online shopping is more of your thing, it's also available via Amazon as well.
Now that sales have begun and the product has received very positive feedback from early customers, – and that MyStretchBar has been fully approved and endorsed by respected members of the fitness, martial arts, chiropractic, and physical therapy communities, DiMarco said the next step is getting his groundbreaking device into the hands of more people who would truly benefit from it.
“Our next move is to help students in physical education classes, with warm ups, cool downs, and adapted physical education – and use it for team sport athletes in schools,” he said. “One thing that they're not doing in middle and high school physical education classes and team sports is stretching effectively to prevent injury... according to a study at the University of Colorado in 2018, in the Orthopedic Journal of Sports Medicine, muscle and ligament strains are the most recurring injury among high school athletes across all sports, and that's happening because people aren't stretching...it's an overlooked and undervalued aspect of physical fitness – which I want to help change.” 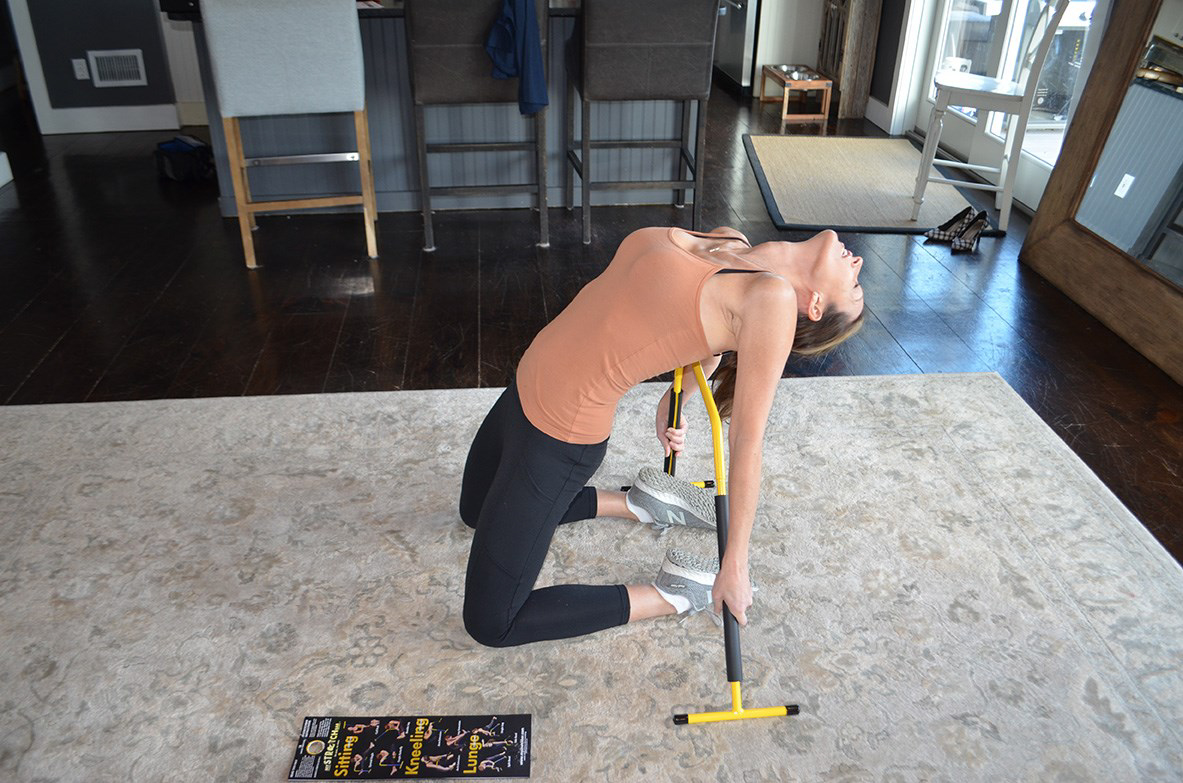 Yoga practitioner uses MyStretchBar to safely execute an arch stretch. Photo Credit: Lindo Skoda
The design and functionality of MyStretchBar is deceptively simple, yet effective; DiMarco noted that after trying other devices, such as straps and blocks, he realized he had to set out on his own and design a device that gave him the stability and support that these other items were sorely lacking. The result is a remarkably versatile device that allows you to stretch a wide variety of muscles and body parts while in numerous different places and positions, DiMarco said. He added...“We also educate our users on how to stretch with a stretching card, stretching manual, and online video library with tutorials and routines.”
"I realized how important stretching was as I got older...thanks to MyStretchBar, I went from not being able to touch my toes to being able to put my palms on the floor,” he said. “This really works well for anybody with flexibility issues at any age…teens, adults, and especially seniors can benefit from this, and it can be used in bed, on the couch, on the floor, in the gym, at the golf course, literally anywhere. I designed it in mind with how the body actually moves when we're playing sports and tested MyStretchBar on people of all ages and sizes...it's totally unique and very effective.”
If you're interested in checking out what MyStretchBar has to offer, please visit www.mystretchbar.com. You can also purchase MyStretchBar via Amazon.