The Transparent Disaster Relief Act of 2018 would better inform disaster survivors about duplicative benefits and increase transparency around recoupments. 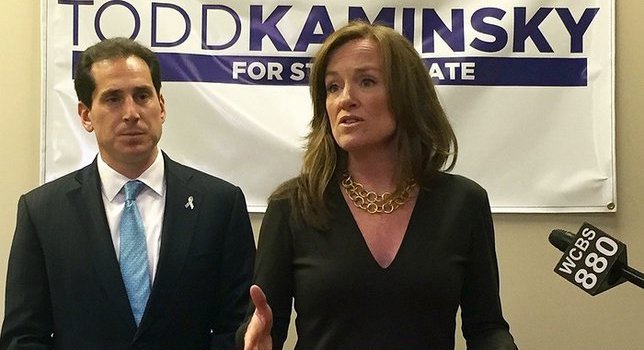 Long Island, NY - October 30, 2018 - U.S. Representatives Kathleen Rice (NY-04) and Peter King (NY-02) today introduced a new bill to amend the Robert T. Stafford Disaster Relief and Emergency Assistance Act and the Small Business Act to better inform disaster survivors about which forms of federal assistance could be considered duplicative and result in a recoupment or, claw-back. The bill also requires the federal government to automatically provide disaster survivors with clear information on how they determine recoupment amounts. The proposed legislation has been endorsed by the Touro Law Center Disaster Relief Clinic, which has been assisting Long Islanders affected by Superstorm Sandy since 2012.
The announcement was made on the six-year anniversary of Superstorm Sandy on the Long Beach Boardwalk, where Rep. Rice was joined by local elected officials and several Sandy survivors from New York’s fourth congressional district.
“Victims of disasters like Superstorm Sandy use whatever assistance they receive to rebuild their homes and put their lives back together,” said Representative Kathleen Rice. “But right now, FEMA fails to inform survivors of which benefits could be duplicative and result in a recoupment. It’s not fair to subject these survivors to claw-backs after they followed the rules. It should be incumbent upon the federal government to provide survivors with clear instructions and comprehensive information so that they can make well-informed decisions. As hurricanes become more frequent and more powerful, the number of Americans applying for disaster relief will only increase. We need to implement these reforms now to protect future storm survivors from encountering this same issue.”
“It is terrible that Long Islanders subjected to the devastation of Superstorm Sandy have to also be subjected to an unclear and convoluted relief process,” said Representative Peter King. “I am proud to co-lead this legislation, which will make disaster aid more transparent and efficient.”
In the aftermath of Superstorm Sandy, a difficult recovery process was made even worse for many survivors when they learned that they had used duplicative benefits and would have to repay the government for money already spent. A common scenario was when survivors used New York Rising funding for the same recovery purposes as other forms of federal assistance, such as Small Business Administration (SBA) loans or Federal Emergency Management Agency (FEMA) grant funding.
Following a major weather disaster like Sandy, FEMA encourages survivors to apply for both FEMA funding and SBA loans, which often arrive quickly, in order to begin the recovery process as soon as possible. After Sandy, Congress also appropriated an additional $4 billion in funding to the U.S. Department of Housing and Urban Development (HUD) to further support New York State’s ongoing recovery effort. This funding was eventually distributed through NY Rising. Eager to rebuild their homes and communities, many Sandy survivors accepted NY Rising funding unaware that it would be considered duplicative to the FEMA funds and SBA loans that they already received and used. As a result, FEMA and NY Rising have sought to recoup millions of dollars in assistance funding from homeowners on Long Island who were simply following the rules.
Currently, the Stafford Act does not require federal assistance programs to provide survivors with information on duplicative benefits nor does it provide them with the explicit option to refuse SBA loans.
The Transparent Disaster Relief Act of 2018 would ensure that anyone receiving federal assistance signs an acknowledgment statement that includes a comprehensive list of resources that could be considered duplicative benefits. The bill also requires that the SBA clearly notifies all approved loan applicants that they are not required to accept the loan.
Finally, the bill requires that anyone who is subject to a claw-back is automatically provided with all the information used by the federal government to determine the recoupment amount. This information is critical to individuals who are challenging a claw-back but is currently only available upon request.
“What we saw in the aftermath of Sandy was a lack of proper information and education being provided to homeowners, especially regarding SBA Loans,” said Melissa H. Luckman, Esq. Director of the Disaster Relief Clinic Touro Law Center. “Still to this day, six years after the storm, my organization receives calls from homeowners who simply do not understand how or why an SBA Loan — which must be paid back with interest — counts as a duplication of benefits against the NY Rising grant program. I want to thank Rep. Rice and Rep.  King for working together on this Bill, and for continuing to work hard for those affected by Sandy. We completely endorse this bi-partisan Bill being introduced today and look forward to a more educated future for those affected by natural disasters in the future.”
Last Year, Rep. Rice was the lead Democrat on the Disaster Assistance Fairness and Accountability Act with Rep. Tom MacArthur (R-NJ), which prohibits FEMA from clawing back disaster assistance funding after three years of initially distributing it to recipients. This bill was included in the FAA Reauthorization Act of 2018 which the President signed into law on October 5, 2018.
The full text of the bill is available here.