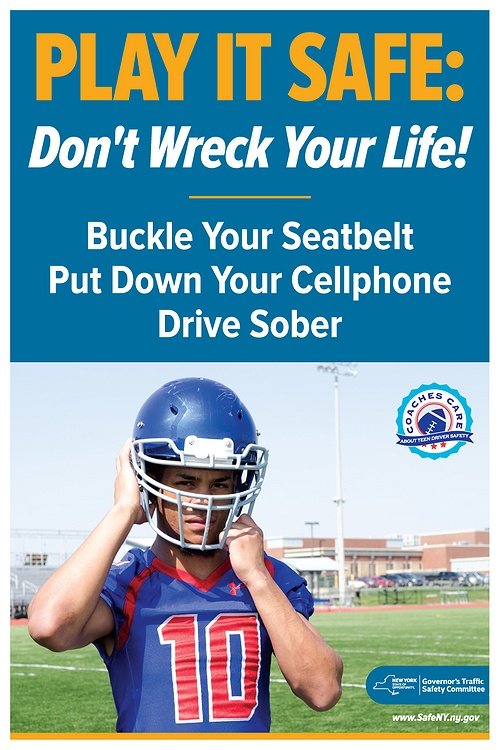 “Coaches can have a significant and lasting impact on young adults, so we’re enlisting their help to encourage teenagers to always drive responsibly,” Governor Cuomo said. “Proper driving habits can make all the difference when it comes to preventing unnecessary tragedies. I encourage all schools and coaches to join us in this effort to keep everyone safe on the roads.”

Coaches Care is the result of a partnership between the Governor's Traffic Safety Committee (GTSC) and schools statewide. The campaign builds upon the Committee’s No Empty Chair campaign, launched in 2014, and the No Empty Chair Cops Care initiative introduced in April 2015, which provide police and school resource officers tools to help them educate teens about safe driving during prom and graduation season.

As part of the campaign, informational posters will be displayed in locker rooms, classrooms, and high-traffic areas in schools. School administrators, athletic directors, and coaches should contact Todd Engwer of the GTSC to request the posters free of charge by emailing him. Talking points are provided on the GTSC website for coaches to help teens understand the dangers they face on the road. Information about the National Highway Traffic Safety Administration's “5 to Drive” list will be made available in these talking points. This list contains five necessary rules for addressing the greatest dangers for teen drivers: alcohol, texting, seat belts, speeding, and extra passengers.

Additionally, coaches are encouraged in the talking points to remind young drivers about the Graduated Driver Licensing (GDL) law, designed to provide time for young people to gain critical experience in various traffic scenarios in a safe and controlled manner. The New York State Department of Health created GTSC-funded pocket guides for law enforcement agencies and others regarding the GDL in Upstate New York, New York City, and Long Island.

New York State Department of Motor Vehicles Executive Deputy Commissioner Terri Egan said, “There are tens of millions of young people involved in organized sports across the nation, making coaches incredible allies in helping to instill positive behaviors and driving habits in our youngest motorists. Keeping New Yorkers safe on the road is our top priority, and many of the dangerous situations teens may encounter on the road can be prevented. I encourage all adults to talk with the teen drivers they love about obeying the rules of the road and developing good strategies to combat dangerous driving.”

New York State Health Commissioner Dr. Howard Zucker said, “Certain adults have tremendous sway over teenaged drivers, and coaches are certainly among them, which is why this new initiative is so important. By using their influence, coaches may be able to instill better driving habits into New York's youngest drivers, saving lives in the process."

According to the Centers for Disease Control and Prevention, motor vehicle crashes are the leading cause of death for U.S. teens, making it important for parents, teachers, coaches, and others who have an influence on youth to join in teaching youth about driving safety. A survey conducted by the Governors Highway Safety Association in February noted that 62 percent of state highway safety offices indicated coaches present one of the greatest opportunities to influence teens in their state.

Teen drivers are especially at risk for being injured or killed on the road due to factors like driver inexperience, lack of safety belt use, impaired driving, distracted driving, and unsafe speed. Statistics from the Institute for Traffic Safety Management and Research indicate that from 2011 to 2013: