A new app will allow commuters to get quick, accurate updates on train schedules and service interruptions. 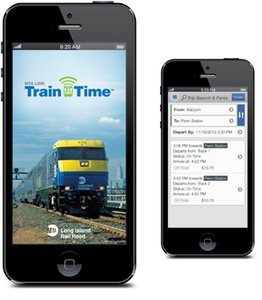 Trekking through the holiday commute just got a little easier, as the MTA has recently expanded the LIRR Train Time app to cover all Long Island Rail Road stations and branches.

Available for Android and iOS, the app can be used to check train schedules, figure out the best route to take, and monitor delays in real time. The app can even tell commuters which track or platform their train will be pulling in to, making it all the easier to ensure a painless and timely train ride. It also can be used to find fare rates, railroad maps, and information about stations and waiting rooms. Alerts about special deals and packages and planned service changes are available as well.

“These apps are designed to be the definitive mobile go-to source for all the information someone would need in order to ride an LIRR… train,” said MTA Chairman Thomas F. Prendergast. “We always say ‘Know Before You Go’ because it makes traveling with us a lot easier, and these apps put a trove of useful information right into your hands when you are on the move.”

Train Time collects data from GPS units mounted to MTA trains to determine whether they are running on time and where each one is at any given moment—the same method that stations themselves use to alert customers when unexpected delays occur. The program has previously been available through the MTA website, and an initial beta test of the app was conducted using the Port Washington and West Hempstead branches. Details about departure tracks are usually posted an hour ahead of time for LIRR stations and ten minutes in advance for trains leaving Penn Station.

“We know how important real-time information is to our customers, and that’s why we’ve been making efforts to expand and improve upon the information we provide,” said Metro-North Railroad President Howard Permut.

Both the Android and iOS versions of the app are free of charge, and have no advertisements. There is also a similar app for the Metro-North line which was released at the same time. Train Time is a first-party program designed to be the definitive scheduling app, but the MTA has previously asked external programmers to build apps to aid commuters and received positive results from the initiative.