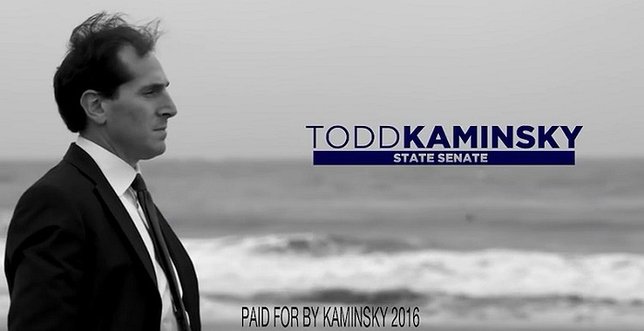 "Voice" highlights Todd's belief that government should serve the people, not the special interests.

South Shore, NY - October 11, 2016 - Today, Senator Todd Kaminsky released the first ad in his re-election campaign.  "Voice", which will run on cable stations across the South Shore, highlights what drives Todd Kaminsky -- the voices and people of the South Shore, from Long Beach to Valley Stream, who have been calling for an Albany that fights for taxpayers and not special interests.

As a former corruption prosecutor, Kaminsky won big cases against corrupt Democrats and Republicans before his election to the State Assembly and Senate.  Since then, Kaminsky has delivered results for Long Islanders, including an historic $4 billion middle class tax cut, passage of a bill that strips convicted politicians of their publicly funded pensions, and over 175 votes times against raising taxes.

After releasing the ad, Kaminsky said: “As a former federal corruption prosecutor, I went to Albany because I believe that government should serve the people it represents, not the corrupt special interests.  That's why I’ve voted over 175 against tax increases, passed a plan to strip convicted politicians of their pensions, delivered a $4 billion middle class tax cut, and fought for an additional $20 million in funding for South Shore schools. Honest government get's real results and I'll never stop fighting for taxpayers on the South Shore.”

The ad can be viewed here.

In April, 2016, Todd won a Special Election to replace Dean Skelos and immediately began serving the South Shore in the State Senate. During his time in the Senate and State Assembly, Todd fought for and won ethics reforms, one of the largest middle class tax breaks in state history, aid for Sandy victims, and a historic $20 million increase in funding for South Shore school districts.