Todd Kaminsky was sworn in Sunday as the 20th District of New York’s new state assemblyman. 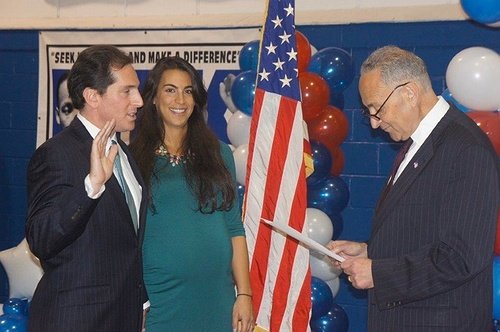 Assemblyman Kaminsky’s inaugural address focused on the importance of local leadership, accountability and the spirit of participatory democracy.  He also spoke about the challenges facing the South Shore of Long Island and Nassau County, pledging to fight for a more robust response to the financial and physical damage done to the region following Hurricane Sandy and the financial crisis.

“With this inauguration, we are at a starting line, facing great challenges,” Kaminsky said. “I share your urgency to get things done, and to help repair and improve our great communities. On the issues that matter to us – taxes, the economy, education, public safety, and the environment – we start this race for a better future. And I am confident we will make it to the finish line together.”

Kaminksy also expressed extreme gratitude to supporters who provided wisdom and aid throughout the campaign.

"I would not be headed to Albany if not for the tireless support of my family, volunteers and key allies, such as Nassau County Democratic Chair Jay Jacobs, Assemblyman Harvey Weisenberg and community leaders from across the district," Kaminsky said.

The ceremony was presided over by the MLK Center’s Executive Director, Myrnissa Stone-Sumair.  After the Pledge of Allegiance, conducted by retired U.S. Army Captain Keith Grant, invocations were led by Rabbi Mordechai Kamenetzky of the Yeshiva of South Shore and Reverend Doctor Dolores Miller of the Evangel Revival Community Church. The crowd was treated to a performance by the children of the MLK Center, a rendition of America the Beautiful by the Woodmere Middle School chorus, and the National Anthem by Allison Golden of Long Beach High School

The Long Beach MLK Center was overflowing with hundreds of supportive community members and leaders, including elected officials from Nassau County, religious leaders, leaders and members from the fire and police departments, and community residents.