The Riverhead Foundation was unable to save a 318-Pound, 3 foot-long female loggerhead turtle that they believe may have died from cold stunning in the waters off of Orient Point. 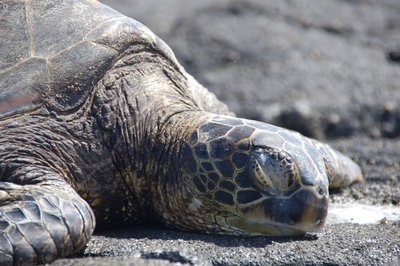 Scientists are trying to piece together what caused the death of a 318-pound, 3-foot long female loggerhead turtle that washed ashore on an Orient Point beach Wednesday morning.
The turtle was discovered by passerby on a beach near Land's End Road. The Riverhead Foundation for Marine Research and Preservation was called, and biologists descended on the site to retrieve the turtle and perform a necropsy to determine what killed the large reptile.

Loggerhead sea turtles are common to the waters around Long Island, but it is very uncommon for them to be seen on land.

Sea turtles typically turn up on beaches to lay their eggs or to sun themselves, but in the case of turtles such as this female loggerhead, some end up tossed onto beaches after being cold stunned. Riverhead Foundation Director and Senior Biologist Rob DiGiovanni told Newsday that as temperatures drop, turtles can become hypothermic, causing them to wash up on shore, appearing as if they are dead. Often, these hypothermic or "cold stunned" turtles are still alive, but may be on the brink of death, as the low temperatures inhibit their ability to swim to warmer waters.
According to the Riverhead Foundation, the cold stunning season is quickly approaching, and at its height, the foundation receives three to four new admits per day of sea turtles that have been affected by the cold waters. The 2012-2013 winter season was a particularly dangerous season for sea turtles, with 87 turtles being accepted to the foundation, and almost half of them were from cold stunning.
If you come across a sea turtle on a beach that appears to be cold stunned, call the Riverhead Foundation hotline at 631-369-9840. The Riverhead Foundation also offers Cold Stunned Sea Turtle Lectures throughout the season to train citizens to become sea turtle beach patrollers.
[Source: Newsday]