On Monday, the United States Merchant Marine Academy learned that a beloved and much admired, long-time member of our USMMA family, former Athletic Director Susan "Sue" Petersen Lubow, has passed away. 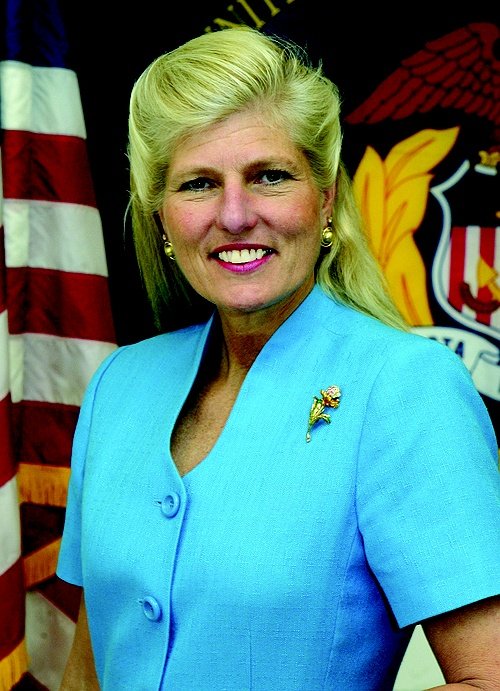 “Today is a very sad day for our Academy,” said USMMA Superintendent RADM James A. Helis. “So much of the success of our Department of Physical and Education and Athletics was because of Sue. She was a strong leader with a great vision and she had an unparalleled love for the Academy and our midshipmen. We express our deepest condolences to her family at this time.”

Petersen Lubow, who started her Kings Point career 36 years ago as a physical education instructor, quickly rose through the ranks and earned an appointment as Athletic Director in 1989. This groundbreaking move marked the first time that a female held that position at any of the United States Federal Service Academies. In March 2014, after a very successful 25 years at the helm of the department, she announced that she was stepping down from her position as the Academy’s Head of Physical Education and Athletics, but would remain on staff as a fully tenured professor.

Petersen Lubow was one of the most accomplished administrators in the history of the Academy. Her contributions are immeasurable. In the 25 years she served as Athletic Director, she expanded USMMA Athletics to over 20 teams and helped develop the Blue and Gray Club, Athletic Hall of Fame, Blue and Gray Golf Classics and other numerous traditions and awards.

“Sue was a legend in collegiate athletics, as the first female athletic director of a federal service academy, and she helped pave the way for all future female athletic directors,” said USMMA Athletic Director Mo White. “She was a role model and mentor to so many student-athletes, coaches and staff members and everywhere you turn here at the Academy you can see Sue’s contributions. Sue meant so much to the USMMA community and we will continue to work to build on Sue’s great legacy!”

In the fall of 1998, Petersen Lubow was honored by the ECAC as the 1998 Jostens Female Administrator of the Year. She is also the most recent recipient of the ECAC’s Katherine Ley Award for being “a strong proponent of women's issues; a creator of programs and opportunities for women in athletics; an idea person; a role model for women coaches and administrators; a person of demonstrated leadership, one who has the ability to make things happen and the ability to work with others; a person with a sense of what the past has to offer and what the future may bring; a person with a sense of humor that makes good times better and bad times easier to bear.”

Petersen Lubow began working at the Academy in 1979, when she was appointed the head coach position for the both the men’s and women’s swimming & diving teams, making her at the time the first female to be the head coach of a varsity men's team at any service academy. During her time at the helm of the men’s and women’s swimming & diving teams, the two programs combined for a 148-67 record over 11 years. Petersen Lubow coached 48 All-America male and female swimmers and divers, including both a men's and women's NCAA Division III Individual National Champion.

Throughout her coaching and administrative career in swimming & diving, Petersen Lubow had been very involved with both USA Swimming and NCAA Swimming & Diving. She served as the Secretary and Rules Editor for the NCAA Division I, II and III Swimming and Diving Committee. Petersen Lubow also acted as the Head Manager for the 1998 World Swimming Championships, travelling with the USA National Team to Perth, Australia in January, 1998. In October 2004, she was tapped as the head manager for the USA Short Course World Swim Team that hosted the World Championships for the first time in history. Petersen Lubow devoted the summers of 1993-95 to the USA National Swim program, serving as Head and Assistant Manager.

Petersen Lubow, an honorary alumna of the USMMA Alumni Association and Foundation, graduated from Springfield College in 1975. She went on to earn her Master's Degree in Health Education from Hofstra University in 1979. Prior to coaching, Petersen Lubow was a national competitor in AAU age group swimming. She was also an All-American in the 200 individual medley as well as the medley relay (1971-72) at Springfield College, where she also served as the team captain. Petersen Lubow was inducted into Springfield College's Athletic Hall of Fame in 1991 and the New York Metropolitan Swimming Hall of Fame in 2009. She was a two-time New York Open Champion and in 1972 was an Olympic qualifier for trials.

For her contributions to the Academy and Intercollegiate Athletics in general, Petersen Lubow was inducted into the USMMA Athletics Hall of Fame in 2014 and then also the ECAC Hall of Fame (as part of its inaugural class) earlier this year. She is also a member of the Metropolitan Swimming Hall of Fame, having been inducted in 2009.

Petersen Lubow will be remembered for cheering loudly for her team, and her contagious enthusiasm, strength and determination inspired thousands over the years. She was an exemplary athlete, a motivating coach, an outstanding leader, and a young athlete’s biggest fan - especially to her daughter, Sarah.

Reflecting on her career, during her speech at the 2014 Athletics Hall of Fame Induction, Petersen Lubow said, “Maybe I did break through barriers and overcome obstacles to give young girls a chance of following their dreams. I just never looked at myself in that light. I chose my profession because I wanted to make a difference, not because I wanted to be a trailblazer, but in reflection – whether I like it or not – I guess I was.”

A funeral service for Sue Petersen Lubow will be held at the Mariners’ Memorial Chapel on the campus of the United States Merchant Marine Academy next Tuesday, Oct. 13, at 11 a.m. More information on the service will be provided close to the date.