Eric Harroun was brought into custody after returning from a three month stay in Syria. 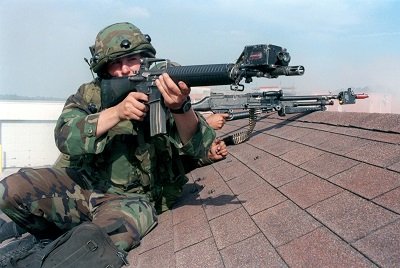 The US has made no secret of its desire for Syrian President Basher Assad to be removed from power, even if it has not gone so far as to offer arms to rebel fighters in the country. Despite opposing Assad’s regime, the FBI has brought an Arizona man into custody who has been fighting to overthrow the Syrian government since January.

Eric Harroun, 30, of Phoenix served in the Army from 2000 to 2003 before leaving on medical discharge after a car accident. Following his discharge, Harroun claims to have fought in several of the Arab Spring uprisings in opposition to established regimes. The former soldier established a YouTube alias as “The American” through which he boasted about his involvement in the rebellions; recently he claimed to have taken down a Syrian helicopter on his Facebook page.

According to an affidavit taken by the FBI, Harroun used an RPG to launch explosives and shot around 10 people with other munitions, though he is unsure whether anyone died from the injuries he inflicted.

Upon arriving in Syria earlier this year, Harroun was quickly armed by the Free Syrian Army, from which he was separated during an attack just days after joining. He retreated from the battle in a truck belonging to another group fighting Assad—the al-Nusrah Front, a branch of al-Qaeda—which has been designated a terrorist organization since 2004. The ex-US soldier was initially treated as a prisoner by the al-Nusrah Front, but soon gained their trust and helped to carry out attacks on several defensive positions held by the Assad regime. Alongside rockets launched at structural targets, he carried an AK-47 while on missions.

When Eric Harroun returned to American soil he was detained by the FBI at a hotel near Washington Dulles International Airport in Virginia; he made no attempts to hide his actions over the past several months. Despite his involvement with an al-Qaeda affiliate, he was not charged with aiding a terrorist organization, but with conspiring to use a weapon of mass destruction outside the US. That law applies to all US citizens in foreign countries, making no exceptions for former soldiers or distinctions between friendly and hostile governments.