Incident is the latest in continuing operational issues at aging power plant. 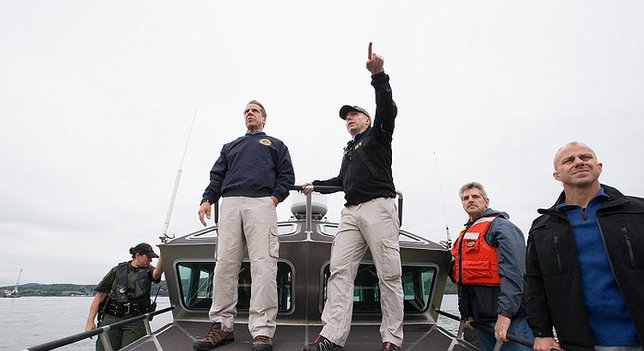 Leak contained within plant with no impact to Hudson River. DEC to continue oversight of Entergy Group.

Buchanan, NY - October 2, 2016 - Governor Andrew M. Cuomo today inspected Indian Point Nuclear Facility by boat and provided an update on the State’s response to an oil spill reported at the facility. On Friday, September 30, the New York State Department of Environmental Conservation immediately responded after being notified by Entergy that an unspecified amount of oil leaked from a heat exchanger into a cooling water discharge canal inside the facility.

Under DEC oversight, Entergy's clean up contractors Miller Environmental deployed absorbent booms to collect the petroleum sheen in the discharge canal and to prevent the spill from reaching the Hudson River. Most of the 600 gallons of petroleum that leaked is contained within the plant and only a small portion reached the discharge canal.

The Governor inspected the facility on Friday Night. DEC spill response staff performed another inspection of the facility on Saturday, October 1, and found no oil or sheen visible in either the canal or the Hudson River. After today’s inspections, no additional petroleum is expected to reach the discharge canal and DEC will continue to monitor Entergy contractors Clean Harbors on Monday as they recover the oil contained within the plant.

“Through our coordinated, rapid response to this spill, we were able to ensure that there were no threats to public health and safety,” Governor Cuomo said. “This incident is the latest in a litany of operational issues at this aging power plant, and I have directed the Department of Environmental Conservation, Department of Health and Department of Public Service to fully examine this spill as part of their ongoing investigation into similar issues at the facility.”

Since 2011 there have been over 40 spills and unexpected shutdown events at the Indian Point Nuclear Reactor, highlighting the ongoing safety and environmental concerns with the plant’s continued operation.