Governor Cuomo issued a warning to college students returning for the fall semester that purchasing fake IDs is not only illegal, but also increases the chance of becoming a victim of identify fraud. 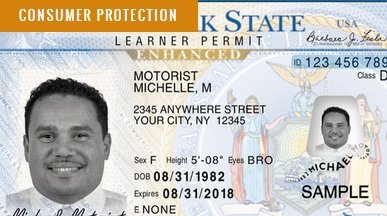 Albany, NY - August 26, 2015 - Governor Cuomo issued a warning to college students returning for the fall semester that purchasing fake IDs is not only illegal, but also increases the chance of becoming a victim of identify fraud. In recent years, investigators from the New York State Department of Motor Vehicles have found dozens of examples of underage license holders becoming victims of identity theft after purchasing fraudulent identification online from overseas companies.

"The ripple effects of identity theft can last for years and more and more college students are opening themselves up to fraudsters by attempting to purchase a fake ID from the Internet,” Governor Cuomo said. “Our message is simple: It’s just not worth it -- both for the immediate consequences of getting caught with a fake ID and for putting their financial future at risk.”

Using only a victim’s name, address, Social Security number, and date of birth, criminals can repeatedly open new lines of credit, take money from bank and retirement accounts, get a job, file false tax returns, and even seek medical attention, making it extremely difficult for a victim to recover his or her own records, name, and life.

According to the 2014 Federal Trade Commission's Consumer Sentinel Network Data Book, 18 percent of identity theft victims were ages 20 to 29; about six percent of victims were 19 years old or younger. These age groups are less likely to regularly track bank account and credit card activity, pay for identity theft monitoring services, and use discretion when sharing information on social media, making them more susceptible to identity theft than any other age group.

New York State Department of Motor Vehicles Executive Deputy Commissioner Terri Egan said, “It is more dangerous now than ever before to purchase a fake ID and the consequences can be severe. It’s not just the potential for a loss of license, but a loss of an entire identity that’s at stake – an identity that can now circulate all across the globe. Buying a fake ID over the Internet, from both U.S. and overseas manufacturers, just to illegally buy alcohol until they’re 21 years old, can land students in trouble for a lifetime.“

SUNY Chancellor Nancy L. Zimpher said, “It is critical that students are aware of the risks they take when using a fake ID, and the dangers that have become even more prevalent with the exchange of self-identifying information over the internet. On campuses across the state of New York, we will continue to urge all SUNY students to refrain from purchasing and using these products in order to keep their identity safe.”

Through targeted enforcement actions with a variety of law enforcement entities, the New York State Department of Motor Vehicles arrests hundreds of people under the age of 21 for possession of false documents each year. Dozens of these individuals have since reported falling victim to identity theft. At one concert last year, 15 people were arrested by Department of Motor Vehicles investigators for possessing fake IDs and three of them later reported that their identities had been compromised. Investigators report that counterfeiters obtain duplicate social security cards, birth certificates, and credit cards, as well as acquire fake licenses through information submitted over the internet.

Most of the people arrested for fraudulent driver licenses or identification cards purchase these documents over the internet from overseas companies. For more than a decade, the Department of Motor Vehicles and its partners in federal and state law enforcement agencies have worked together to crack down on counterfeiters by identifying sources and shutting down their operations, including, most recently, the ID Chief website. The Department of Motor Vehicles continues to work with the U.S. Department of Homeland Security to shut down the operations of many of the companies who have since tried to fill that void.

The New York Department of State's Division of Consumer Protection offers tips on how to respond when your identity or financial accounts have been compromised. In addition, the Division's Identity Theft Prevention and Mitigation Program provides information and resources to help New Yorkers reduce the risk of identity theft, including tips on safeguarding personal information, using computers wisely, and carefully reviewing bills and credit reports for accuracy.

This consumer alert follows Governor Cuomo’s August 19 announcement of a collaboration between the Department of Motor Vehicles and the New York State Liquor Authority to educate bar owners, security, and staff of licensed establishments about new security features included on driver licenses, permits, and ID cards issued by the state. The brochure that outlines security features on the new ID cards can be found here. The Governor’s full announcement can be found here.