A new island rose from the seafloor near Pakistan, but the quake caused massive devastation to nearby communities. 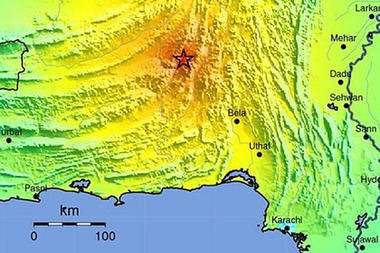 A 7.7-magnitude earthquake struck the nation of Pakistan on Tuesday afternoon. The force of the earthquake was so strong that it forced a small island, roughly 20-30 feet tall and 100 feet in diameter, to rise from the sea off the coast of Gwadar.

According to the Telegraph, the island is too far away from the quake’s epicenter to have been caused by seismic displacement, and is likely a “mud volcano” caused by pressurized subterranean muds and clays being released by the earthquake and rising to the ocean’s surface. It could remain for years, but may erode over time and eventually disappear entirely.

The quake itself lasted two minutes, and was felt as far away from its epicenter (41 miles northeast of Awaran, Pakistan) as Dubai, UAE and Delhi, India. Though the region hit hardest by the quake is sparsely populated, it is not uninhabited; the tremor had tragic effects for those living in the area.

Recent estimates place the total loss of life around 330 and the number of wounded over 440. Those numbers could very well increase as recovery efforts sort through the wreckage—many residents lived in simple mud homes now leveled by the calamity, and dead or injured could lay buried under the rubble.

Officials from the district of Awaran report that about 90% of the homes in the area had been destroyed. 250 houses collapsed in the town of Dalbedi, and other areas have not yet been fully assessed.

Over 300,000 people throughout the districts of Awaran, Kech, Gwadar, Panjgur, Chaghi and Khuzdar are believed to have been directly impacted by this event. Mountainous terrain and unstable communication systems are hampering recovery efforts. Wounded are being carried to neighboring districts, and the most seriously injured are being airlifted to Karachi.

Video Courtesy of the Telegraph