Governor Cuomo announced the installation of the “Cool Globes” exhibit in Battery Park City, which will run through November 20. The announcement is in recognition of Climate Week, which Governor Cuomo proclaimed from September 22-29. 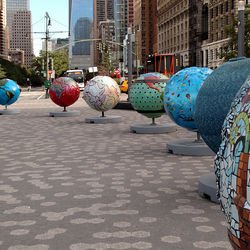 Albany, NY - September 23, 2015 - Governor Cuomo announced the installation of the “Cool Globes” exhibit in Battery Park City, which will run through November 20. The public art exhibition aims to raise awareness of and inspire exhibit viewers to take actions on climate change.

‎“As we continue to face some of the most severe weather events in our history, we must reduce, mitigate and adapt to the effects of this new normal,"Governor Cuomo said. ‎"I encourage New Yorkers to visit this exhibition and learn more about what you can do to help combat climate change.”

The exhibition, which is sponsored by Cool Globes, Inc., features 12 globe sculptures, each with a message on how both the public and businesses can help reduce and mitigate climate change every day through actions such as increasing energy efficiency in homes and businesses, purchasing products made with 100-percent post-consumer material, increasing recycling and greening urban landscapes.

The announcement is in recognition of Climate Week, which Governor Cuomo proclaimed from September 22-29 to raise awareness about the challenges we face with a changing climate and to highlight New York’s actions to increase resiliency and curb emissions as global leaders meet in New York City this week.

“We are delighted to work with Governor Cuomo to bring Cool Globes to New York to celebrate New Yorkers commitment to addressing climate change and building a more sustainable future,” said Wendy Abrams, founder of Cool Globes, Inc. “The globes promote solutions to climate change with simple actions by individuals and businesses.”

“Battery Park City is the perfect site for the Cool Globes exhibition and we are thrilled to host them,” said Shari C. Hyman, President of the Battery Park City Authority. “As an area that understands firsthand the challenges of climate change and the importance of resiliency measures, it is particularly fitting these globes have found their temporary home here on Pier A Plaza.”

The exhibit premiered in Chicago in 2007, in partnership with the Field Museum of Natural History and Mayor Daley’s Office of Environment, with more than three million viewers. The exhibit has traveled the world, making stops in Washington D.C., San Francisco, Los Angeles, San Diego, Houston, Vancouver, Sundance, Cleveland, Boston, Copenhagen, Geneva, Marseilles, Amsterdam and Jerusalem. Cool Globes, Inc. was established as a 501c3 non-profit in 2006.