The Students and Families Empowerment Act would expand student loan interest deductions and extend the grace period for millions of recent graduates. 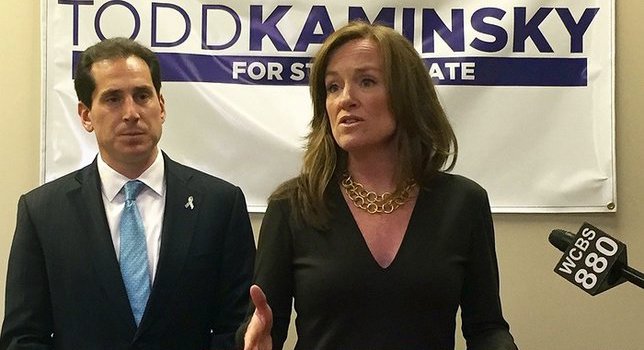 Garden City, NY - Sept. 21, 2018 - U.S. Representative Kathleen Rice today introduced a new bill that would help ease student loan debt for millions of recent college graduates and their families. The Students and Families Empowerment Act would amend the Internal Revenue Code to effectively remove the $2,500 cap on deductions for student loan interest. Borrowers would be able to deduct all their interest for student loan amounts up to $750,000 – the same loan threshold as mortgage interest deductions. The bill would also eliminate the income limits on student loan interest deductions, allowing individuals earning more than $80,000 annually ($165,000 for couples filing jointly) to take these deductions on their taxes, and end the phase-out for individuals earning more than $65,000 ($135,000 for couples).
Additionally, the Students and Families Empowerment Act amends the Higher Education Act of 1965 to extend the grace period from 6 months to 12 months before recent graduates must begin to pay back their loans; this grace period also applies to parent borrowers, who are generally not afforded a grace period. Further, the bill prohibits interest from accruing during this 12-month grace period for most undergraduate, parent, and graduate student borrowers. The changes in this bill would apply to federal loans only.
The announcement was made today at Adelphi University in Garden City, where Rep. Rice was joined by Adelphi University Provost and Executive Vice President Steve Everett, Assistant Vice President of Student Financial Services Sheryl Mihopulos and NY-04 residents.
“College graduates are one of our country’s greatest assets,” said Representative Kathleen Rice. “But instead of building financial security, starting businesses and buying homes, most recent graduates today are leaving college with crippling debt. As Congress prepares to reauthorize the Higher Education Act, we need to prioritize serious reforms to this process. My bill would help ease the burden of student loans by expanding interest deductions and extending the grace period for repayment – so that students actually have a chance to get on their feet and start their careers. These are commonsense changes that would make this process infinitely more manageable for millions of families across our country.”
According to a 2015 study, seven in 10 college seniors who graduated from public and private nonprofit colleges had student loan debt, averaging $30,000. In New York State, 72% of graduates leave college with an average of nearly $30,000 in debt. Today, student loan debt in the United States has skyrocketed to $1.5 trillion. And with one in three parents saying they will assist their children with repayments, student loans are no longer just threatening the financial stability of recent graduates, they are also affecting older Americans who have had to dip into their savings and postpone retirement.
Not only will this bill help alleviate this burden for students and parents, but by increasing the deductions on student loan interest to match those of home mortgages, this bill will also encourage more young Americans to enroll in higher education in the same way that our current tax policy encourages home ownership.
“Affordability is top-of-mind at Adelphi – the very reason we provide millions of dollars in institutional aid every year to 95 percent of our undergraduate students,” said President Christine Riordan, President of Adelphi University. “It is so encouraging that Congresswoman Kathleen Rice is taking a significant step to help students and families better afford the costs associated with paying for college and ultimately paying off student debt.”
“A college degree remains the most effective way for individuals to improve their career prospects and safeguard their economic futures,” said Mary Beth Labate, President of the Commission on Independent Colleges & Universities. “The repayment incentives in this bill will encourage more students to make that all-important investment in a college degree. We applaud Rep. Kathleen Rice’s efforts to make investing in a college degree easier for New York’s students and families.”
The full text of the bill is available here.