Rep. Rice, Local Leaders Announce That “East Garden City” Will Be Re-Designated as Part of Uniondale

U.S. Representative Kathleen Rice announced today that the U.S. Census Bureau has agreed to re-designate “East Garden City” as part of Uniondale, after hearing overwhelming support for the re-designation from local officials and community leaders ... 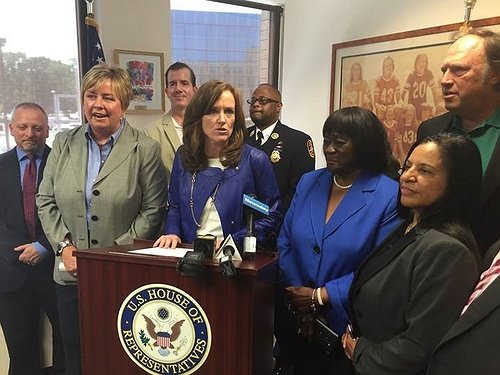 Garden City, NY - May 29, 2015 - U.S. Representative Kathleen Rice announced today that the U.S. Census Bureau has agreed to re-designate “East Garden City” as part of Uniondale, after hearing overwhelming support for the re-designation from local officials and community leaders at a meeting in Rice’s Garden City District Office. The three-square mile area has historically been part of the unincorporated hamlet of Uniondale, but is currently designated in census records as “East Garden City,” which advocates have argued is unwarranted, divisive and damaging to the identity of the larger Uniondale community. Rice wrote a letter earlier this year to the Census Bureau’s New York Regional Director, Jeff Behler, requesting the meeting and expressing her opposition to the “East Garden City” designation, and the Town of Hempstead recently adopted a resolution requesting that the designation be eliminated and the area be made part of Uniondale.

“I’m proud to announce that the Census Bureau has agreed to repeal the ‘East Garden City’ designation and make Uniondale whole again,” said Representative Kathleen Rice. “This was a truly collaborative effort that started at the grassroots, with Uniondale residents raising their voices and refusing to allow their community to remain divided. We heard them loud and clear, and we brought all the stakeholders to the table so we could get it done. I want to thank the Census Bureau for being so responsive and cooperative throughout this process, and I want to thank all the activists, community leaders and public officials from all levels of government who worked together to make this happen.”

“While the Town of Hempstead does not have jurisdiction over changing the name of a Census Designated Place, our government has adopted a resolution requesting that the U.S. Census Bureau eliminate the ‘East Garden City’ CDP and make it part of a unified Uniondale CDP,” said Town of Hempstead Supervisor Kate Murray. “I cannot think of a more important quality-of-life issue than properly identifying with one’s hometown, and I thank Congresswoman Kathleen Rice for bringing this important mission to the federal level. She’s been a great partner in this endeavor.”

“The Uniondale community has fought long and hard for this and I am proud they got the victory they deserved. Uniondale is one community in both name and heart,” said Minority Leader of the Nassau County Legislature Kevan Abrahams.

"This is a clear example of government working for the people. I'm so glad to see our constituents come forward with a concern and fight to have their voices heard. This is a victory for them - the people of Uniondale, who are now justly unified in name once again," said Town of Hempstead Councilwoman Dorothy Goosby.

“Today Uniondale has been reunited in name, but I know they were always united in spirit. Congratulations to all the community and civic leaders that fought tirelessly for this,” said Nassau County Legislator Siela Bynoe.

“The Greater Uniondale Area Action Coalition thanks Congresswoman Rice and all of our State, County, and Town representatives for taking action to make Uniondale whole. We applaud them for their leadership and responsiveness to our concerns.  By filing a request to eliminate East Garden City from the 2020 Census and change it to Uniondale, they are making it crystal clear that they represent their constituents’ interests first and foremost,” said Dr. Greg Maney and Jeannine Maynard, Co-Facilitators of the Greater Uniondale Area Action Coalition.