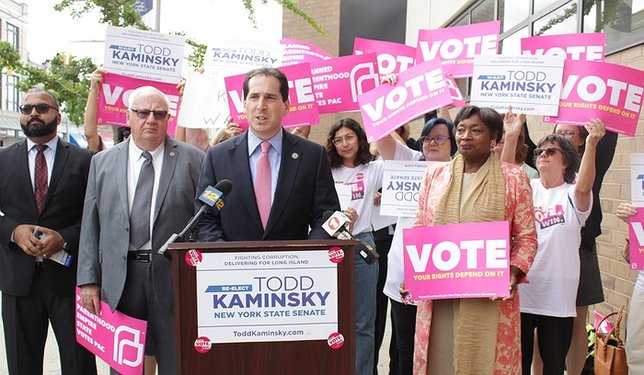 Long Island, NY - Sept. 20, 2018 - With women’s rights under attack on the federal level, Senator Kaminsky, Senate Minority Leader Stewart-Cousins, local Advisory Committee member of Planned Parenthood Empire State Votes PAC JoAnn Smith and Long Island advocates rallied for the Reproductive Health Act: a law that will make Roe v. Wade permanently law of the land in New York.
Under current New York State law, a woman’s right to access a legal and safe abortion is not secured -- New Yorkers have no statutory protection if the Supreme Court overturns Roe v. Wade. The Reproductive Health Act (RHA) will fix that, ensuring Roe V. Wade is the permanent law of New York -- taking abortion out of the penal code and into the Public Health Law.
For years, New York State Senate Republicans blocked the passage of the RHA. Kaminsky is a co-sponsor of the bill.
“New Yorkers have historically led the fight to protect women’s rights, yet our current Senate leadership is putting those rights at risk,” said State Senator Todd Kaminsky. “With some much uncertainty in Washington, we must act now to ensure those rights aren’t lost here in New York. As State Senator, I have – and will continue – to fight for a woman’s right to choose. I am proud to have Planned Parenthood PAC’s endorsement and under Andrea Stewart-Cousins’ leadership, the Reproductive Health Act will become New York law.”
“Todd Kaminksy is a true champion for reproductive rights,” said Minority Leader Andrea Stewart-Cousins. “I need him in the Senate to help me stand up for choice and push back against the Trump Republicans assault on women's health. With Todd in the Senate and a strong progressive Democratic majority we can finally pass the Reproductive Health Act!”
“Our equality, health, and well-being face unprecedented threats and we know Senator Todd Kaminsky is committed to securing a better future for New Yorkers,” said Robin Chappelle Golston, Chair of Planned Parenthood Empire State Votes PAC. “With the Trump administration determined to roll back access to reproductive health care from contraception to abortion, the stakes for the 2018 general election could not be higher. Our New York legislators must fight to protect our rights and ensure that our government works for us and Senator Todd Kaminsky is our proven fighter. We must send Senator Todd Kaminsky to Albany to secure our health care and rights.”
“Senator Todd Kaminsky fights for the rights of all our community members and we are proud to have him as our state senator,” said JoAnn Smith, local Advisory Board member, Planned Parenthood Empire State Votes PAC. “Todd Kaminsky has always been a champion for women's rights and we need his energy, passion, and support in Albany, now more than ever. We stand with Senator Todd Kaminsky as he stands up for our equality and critically needed access to reproductive health care.”
At today’s rally, members of the South Shore Women’s Alliance presented Senator Kaminsky with over 400 signatures from South Shore Long Islanders in support of the legislation.