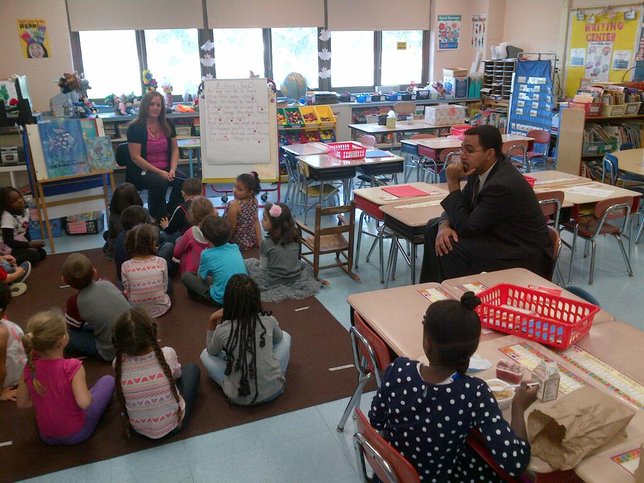 The meeting, held in the school library, had parent, teacher and district representatives in attendance and served as an opportunity to discuss the issues that are important to the William Floyd School District.

“We had an honest and candid conversation about Common Core and the aspects that are working such as increased collaboration, as well as some of its challenges,” said Paul Casciano, EdD., Superintendent of Schools, William Floyd School District.  Other issues that were discussed are the state’s foundation formula for state aid and the impact on high-needs districts, APPR, unfunded mandates and more.

“I am extremely proud of all the representatives at the meeting who were forthright with their comments, constructive criticisms and suggestions,” said Robert Vecchio, President, William Floyd Board of Education. “I thank both Senator Zeldin and Commissioner King for taking the time to hear our thoughts and concerns.”

Senator Zeldin, who has been critical of Common Core’s implementation process, said that it was important for him to participate in this dialogue with Commissioner King and various members of the William Floyd School District community. “While the Commissioner and I do not see eye to eye on Common Core, it’s most important to maintain an open dialogue,” he said. “Whether you’re for or against Common Core, or any other education initiative for that matter, there’s always room for improvement. If there is one thing we were reminded of today, it’s that we all have to remain open minded for the sake of our children.”

"I enjoyed my visit to John S. Hobart Elementary School and thank Senator Zeldin for inviting me,” said Commissioner King. “It was great to visit classrooms, talk with teachers and students and see the Common Core in action. I thank Superintendent Paul Casciano, Principal James Westcott and the entire staff for welcoming me and sharing their experiences."

Senator Zeldin and Commissioner King visited four John S. Hobart classrooms, including those of Senator Zeldin’s daughters who were classmates and friends of Aidan Tarbell.