Over the past week, Senator John Brooks has attended eight ceremonies for the many students who earned their high school diplomas. 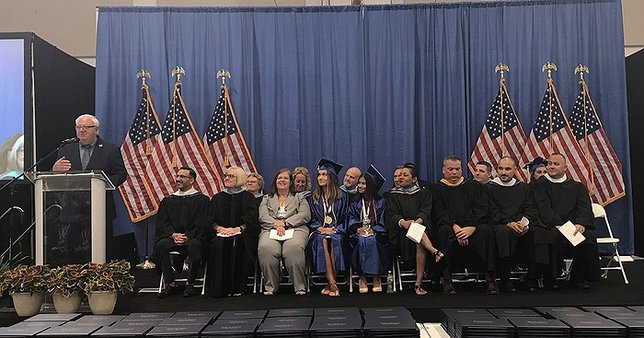 Seaford, NY - June 29, 2018 - Senator John Brooks has attended eight graduation ceremonies for the middle schools, high schools, and technical schools in his Senate District. The Senator is an outspoken advocate for high-quality education, and commended the graduating seniors for their hard work.
“It has been a real pleasure and honor to spend time with the many graduating seniors from the 8th Senate District and the educators who have worked tireless to prepare these young adults for the future,” Senator John Brooks said. “Speaking with the parents and families of these seniors, their pride in their children’s accomplishments is obvious and well-deserved. I want to join my all of my constituents in applauding the graduating seniors of 2018 and wishing these great students well as they go from strength to strength.”
Over the past week, Senator John Brooks has attended eight ceremonies for the many students who earned their high school diplomas or moved up from middle school to high school. As a State Senator, John Brooks has advocated for increased state aid for Long Island schools and investment in these students’ education. Senator Brooks has been outspoken on the need for a high-quality public education system to ensure Long Island students are well prepared for the new economy.
The graduation ceremonies Senator Brooks has attended include: