The Long Island Sunrisers Drum & Bugle Corps loaded up their buses for the eight hour hike to Rochester, NY to compete in the Drum Corps Associates World Championships with dozens of other groups. 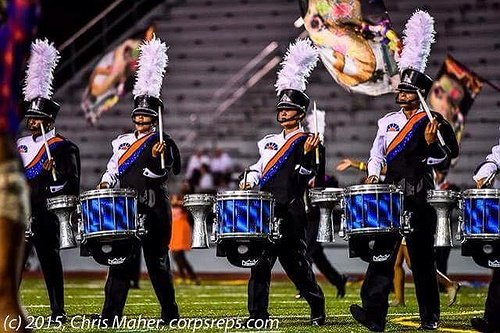 Long Island, NY - September 10, 2015 - The Long Island Sunrisers Drum & Bugle Corps loaded up their buses for the eight hour hike to Rochester, NY to compete in the Drum Corps Associates World Championships with dozens of other groups.  The Sunrisers were heading into Championships after a great season of competitions throughout the Northeast.

The competition was fierce.  Prelims were held on Saturday.  This is where all the competing groups square off to see where they will placed going into finals.  Only the top 10 will be able to move on.  The Sunrisers marched into prelims with confidence and desire for excellence.  You could see it in their faces that they were going to be spectacular.   And, spectacular they were.  The judges appreciated the excellence in their performance and the corps was slotted for ninth position.  The group made finals!  This is the first time in 19 years that the Sunrisers made the cut!

Sunday is finals night.   The Corps took the field with pride.  When the announcer announced, “From Long Island, New York -   The Long Island Sunrisers” the crowd was on their feet with cheers!

The corps performed and were nothing but amazing. The final score of 85.38 the corps placed ninth in the world!

Executive Director, Larry Visconti states, “we are pleased with our progress towards becoming the premier representative to Drum Corps Associates for Long Island”.

The mission of the Long Island Sunrisers is to provide performers an educational experience through the marching and visual arts. We value and instill dedication, personal worth, discipline and a strong work ethic. We strive to enrich the lives of all our performers while providing the community with an enjoyable, entertaining and unique musical experience.