Over 20 courageous Long Islanders are announced by Long Island Fight for Charity as boxers in its 12th main event this November. 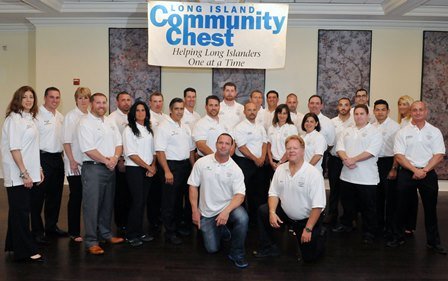 Smithtown, NY - June 24, 2015 - The organizers of the Long Island Fight for Charity held its “Boxer Announcement” reception this past Tuesday at Stonebridge Golf Links & Country Club in Smithtown. The 2015 boxers took center stage before a gathering of supporters and fans as their names were revealed. The boxers, men and women from the Long Island business community, will now start training to prepare to step in the boxing ring at the 12th Main Event to be held this November.

The upscale networking event, sponsored by Lessing’s and held at the Stonebridge Golf Links & Country Club, welcomed about 250 Fight for Charity committee members, sponsors, supporters, volunteers, boxers, their families, fans and volunteers as well as business, nonprofit and other community leaders who were anxious to hear the names of this year’s boxers. The Fight for Charity 2015 Presenting Sponsor will once again be Alure Home Improvements. The Main Event in November will feature up to 26 boxers.

The 12th Long Island Fight for Charity, scheduled for Monday, November 23, 2015, is expected to attract more than 1,200 people and raise more than $150,000 for local not-for-profit charitable organizations. Over the past 12 years, the Fight for Charity has given away close to $1 million to local charities, including the Long Island Community Chest, The Genesis School and the National Foundation for Human Potential.

“It is inspiring to see these business men and women volunteer their time, efforts and bodies for charity. The Fight for Charity was created to help fellow Long Islanders who are facing challenges and struggling in their everyday lives. This event is one of a series of events leading up to the big night that the Long Island business community is supporting. Thank you to Steve Kirschbaum and Lessing’s for their support of our mission by sponsoring this event at the Stonebridge Golf Links & Country Club, the perfect place for introducing the 2015 boxers and the individuals who will be working to make the 12th Fight for Charity a memorable night and a fundraising success,” said Jeff Cohen, Fight for Charity Co-Founder.

For more Fight for Charity information and sponsorship opportunities call (877) 240-7821.