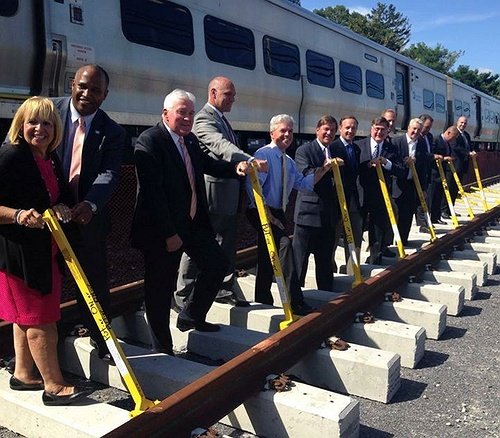 Albany, NY - August 27, 2015 - Governor Cuomo announced that MTA Long Island Rail Road has reached an important milestone to improve service on the busy Ronkonkoma Branch. Workers began installing the first sections of rail on the $388 million Double Track Project, which will build a second track over an 18-mile stretch between Farmingdale and Ronkonkoma stations.

"Today, we take action to help alleviate congestion on one of the Long Island Rail Road's busiest lines and improve the commute for the tens of thousands of Long Islanders who depend on it,” Governor Cuomo said. “After decades of talk, I'm proud to see the Double Track project become a reality."

“The Double Track Project is the key to improving service reliability and on-time performance on one of the LIRR’s busiest branches by allowing us to increase service during off-peak and weekend periods. The MTA is investing billions of dollars in this and other LIRR infrastructure improvements and using an innovative design-build process that gets the job done faster. This commitment is sure to pay dividends by making Long Island more competitive and more convenient long into the future,” said MTA Chairman and CEO Thomas F. Prendergast.

Ridership on the LIRR’s Ronkonkoma Branch is over 48,000 each weekday and has doubled over the last 25 years, growing in popularity since the line was electrified in 1988. With just one track along most of the 18-mile route between Farmingdale and Ronkonkoma, the LIRR can operate a limited number of trains and lacks operational flexibility in the event of a disruption. If one train becomes disabled, all other trains (east and west) have no way around the problem.

Construction of an uninterrupted second track between Farmingdale and Ronkonkoma has been part of the LIRR’s vision for decades. With design of the full project moving ahead, the first phase of construction got underway last year with workers clearing the path for four miles of new track between Ronkonkoma and Central Islip. The budget for the project design and this first section of track is $138 million, funded in the MTA’s 2010-2014 Capital Program. Phase 2 of the Double Track Project will extend the second track another 12.6 miles to Farmingdale, a goal the LIRR hopes to reach by 2019. The second phase’s $250 million cost is included in the MTA’s proposed 2015 – 2019 Capital Program.

“The four-mile stretch between Ronkonkoma and Central Islip is the first leg of the Double Track Project that will ultimately bring half-hourly, off-peak service to the Ronkonkoma Branch, improve service reliability and support economic growth by constructing a second track 18 miles to Farmingdale. When complete, east and westbound trains will operate simultaneously between Farmingdale and Ronkonkoma. This will mean better reverse peak service to help spur the growth of employment centers on Long Island,” said LIRR President Patrick A. Nowakowski.

Nowakowski was joined this morning by local elected officials, including Suffolk County Executive Steve Bellone and State Sens. Phil Boyle and Thomas Croci, and Long Island business and labor leaders for the ceremonial placement of the first section of rail near the Pond Road railroad crossing in Ronkonkoma. Funding for the second phase of the Double Track Project is included in the MTA’s proposed 2015 - 2019 Capital Program.

“I applaud Governor Cuomo and the Long Island Rail Road’s extensive and proactive efforts to add a second a track on the Ronkonkoma line. Not only will service be enhanced and more convenient for our residents, but this project is an important step toward realizing the county’s Innovation Zone vision, which will connect our world-class assets and downtowns together – such MacArthur Airport and the Ronkonkoma Hub – through transit-oriented development in order to build a better quality of life for our residents. In order to attract the best and brightest professionals, we must create an innovation economy and a world-class transportation hub. Double Track is an important step to achieve this goal,” Suffolk County Executive Bellone said.

“Anytime we can increase reliability, productivity and efficiency for our commuting public it is a step in the right direction. Kudos to the MTA and LIRR for taking this innovative and economically savvy step to increase rail service in this, the busiest hub of the LIRR,” Senator Phil Boyle said.

“This is a momentous occasion for Long Islanders and I am particularly appreciative the LIRR decided to hold this event at the Pond Road crossing because the community, Town of Islip and myself have been especially supportive of the LIRR elevating this crossing and we are pleased to hear that LIRR is considering this project as they begin an overall evaluation of all of their grade crossings. This project, as well as the Double Track Project, serves the interests of our residents well and we thank the LIRR for their support and hard work,” Senator Thomas Croci said.

“Today, as the first section of the second, long-awaited track is laid down, we celebrate a great milestone for the Ronkonkoma Branch of the Long Island Rail Road,” said Assemblyman Michael Montesano. “This additional track has been desperately needed for many years in order to enhance service for all travelers, from Ronkonkoma to Farmingdale. I have proudly supported the Double Track Project since its early introduction and am thrilled to see it through its fruition.”

Assemblyman Joseph Saladino said,"For the commuters of Long Island all upgrades and investments in our transportation system are extremely important. I appreciate the fact that the governor has recognized this and continues to help us push for the investments in our trains, railway stations and roads that will enhance the essential services Long Islanders deserve."

Brookhaven Town Supervisor Ed Romaine said, “This investment will help commuters and visitors travel with more ease and safety and lay the groundwork for strong economic growth. Commuters and residents will soon be able to get to where they need to go with more ease and efficiency and I thank the Governor and the State Legislature for making this project a reality.”

Islip Town Supervisor Angie Carpenter said, “I welcome the double track to the Ronkonkoma Railroad Station. Travelers to and from MacArthur Airport will be able to get to midtown faster, cheaper and more comfortably than ever before. I thank the Governor for his commitment and leadership in improving our infrastructure needs here on Long Island.”

Babylon Town Supervisor Rich Schaffer said, “When completed, this second track will make commuting to work and back much quicker for the many people that rely on this service. I thank Governor Cuomo for his commitment to improving our infrastructure and making life better for those that use it. I am happy to see this first piece laid down today and look forward to the timely completion of this project.”

Kevin Law, President and Chief Executive Officer of the Long Island Association, said, “The Long Island Association strongly supports the LIRR’s Double Track Project and applauds Governor Cuomo’s efforts to ensure that the MTA’s 2015-2019 Capital Program is sufficiently funded to see the Double Track effort through to conclusion. Completing Double Track is crucial to the economic future of our region. Not only can we look forward to service improvements, but the second track is also key to the future development along the branch, including the construction of a new train station near Republic Airport in Farmingdale to serve the busy Route 110 business corridor and to spur interest in future transit oriented development there.”

On any given day, between 50 and 75 construction workers are laboring on the Double Track Project. By the time the job is done, the LIRR estimates Double Track will have injected close to $100 million into the Long Island economy and created as many as 1,000 new jobs.

Double Track is one of seven major LIRR construction projects subject to an innovative Project Labor Agreement with the Building and Construction Trades Council of Nassau and Suffolk Counties. The unions pitched in by signing an agreement that will result in an estimated direct labor savings of over $6 million or about 11% of the total labor cost of these capital projects. In addition to reducing costs, the pact provides opportunities for minorities and women to enter the trade union apprentice program and includes non-discrimination provisions in union hiring hall and job placement practices.

The LIRR selected the international design and engineering firms STV and AECOM to help plan and carry out the Double Track Project. AECOM and New York based-STV are leaders in the rail transportation industry. The contractors who have been preparing the new right of way for track installation and new retaining walls are Queens-based Skanska USA Civil, a leading civil engineering and infrastructure contractor, which teamed with Farmingdale-based Posillico, Inc. Posillico has served Long Island and the tri-state area since 1946.

More information about the Double Track Project can be found here.