Extra Getaway Services on Friday, August 29, Will Start the Weekend 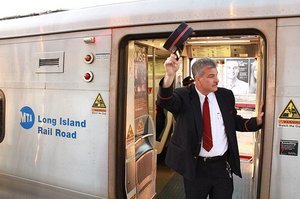 New York, NY - August 29, 2014 - As a reminder, MTA railroads will provide extra service on Friday, August 29, to help customers get a head start on the long holiday weekend. All MTA services will operate on reduced schedules on Labor Day.

Update: MTA Bridges and Tunnels will suspend construction work at 6 a.m. on Friday, August 29 (not 1 p.m. as previously reported).

Because of the J’Ouvert Parade on Monday, September 1, from 2 a.m. to 8 p.m. in Brooklyn, the Church Av 2 Subway Line  station will be closed and bypassed from 11 p.m. Sunday, August 31, to 4 a.m. Monday, September 1. Buses in the area will be rerouted.

Staten Island Railway
Staten Island Railway (SIR) customers looking to get a head start on their three-day weekend will be able to catch earlier afternoon express train service on Friday, August 29, with Staten Island Railway’s Early Departure Getaway schedule. This schedule means extra SIR trains will be added earlier in the afternoon beginning at 2:30 p.m. from the St. George Ferry Terminal. There will be one express train and one local train awaiting every boat until 7:50 p.m. SIR will operate on a Sunday Schedule on Labor Day, Monday September 1.

The Early Departure Getaway service plan on SIR is also available on the Friday leading into the President’s Day and Memorial Day weekends, the day before Independence Day, the Wednesday before Thanksgiving, and the day before the Christmas and New Year’s.

MTA Bridges and Tunnels
MTA Bridges and Tunnels will suspend routine construction and maintenance work at its facilities beginning 6 a.m. Friday, August 29, through the end of the morning rush on Tuesday, Sept. 2, to help smooth travel for those hitting the road for the Labor Day weekend. Work will continue at the Bronx-Whitestone Bridge where a full-time lane closure is in effect.