Legislator Nowick was honored to attend a memorial service for first responders. 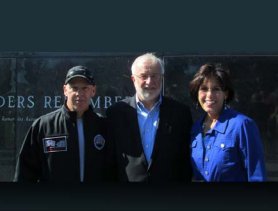 Smithtown, NY - September 9, 2013 - Suffolk County Legislator Lynne C. Nowick was honored to be invited to attend the memorial service for responders who have died and will continue to die from illnesses developed while working at Ground Zero after the September 11 attacks on the World Trade Center. According to John Feal, president and founder of the FealGood foundation, “This is the only responders’ park in the nation dedicated to honor those who have died from illnesses related to working at Ground Zero.” The park is located at the intersection of Gibbs Pond Road and Smithtown Boulevard in Nesconset.

In addition to the names of the deceased engraved on the wall, are the words courage, honor and sacrifice. Legislator Nowick stated, “Those words – “courage,” “honor” and “sacrifice” – are fitting words to describe the men and woman who worked at Ground Zero and consequently are no longer with us today.” “My heart goes out to their loved ones,” Legislator Nowick added.
Legislator Nowick reminds “responders and survivors present at the 9/11 crash site between September 11, 2001 and May 30, 2002, whose physical harm is a direct result of the terrorist-related crashes or debris removal that they have until October 3 to file a claim with the September 11 Victim Compensation Fund. For more information, please go to www.vcf.gov.