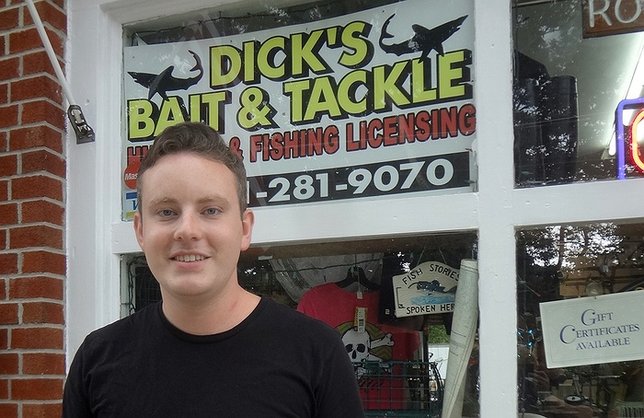 Mastic Beach, NY - August 22, 2018 - Born and raised in Mastic Beach, James Evans has called a variety of locations home over the last few years, having attended college in Virginia and later living in Manhattan for a period of time. However, he has recently moved back to his hometown to follow his dreams of becoming a filmmaker and establishing a new Mastic Beach-based film production company; a first for the area.
“I'm going to be filming my next three movies here in Mastic Beach,” Evans said. “The first will be my current project, Bait and Tackle, followed by two other scripts I recently finished writing, both of which will be based here in Mastic Beach as well.”
When it comes to his filmmaking career – which currently consists of a series of short films, with the upcoming Bait and Tackle being his first feature-length effort – Evans says that he was inspired by the mythos of his hometown.
“I'm really inspired by this town and the people who inhabit it, the personalities and its vicinity to the ocean,” he said. “I didn't realize until I moved to George Mason University for my first year of college and found myself landlocked in Virginia...I missed having water nearby. The ocean was three minutes away my entire life but I truly learned to appreciate it when I had moved away.”
Currently aged 25, Evans is a graduate of William Floyd High School; he then went on to George Mason University, and later transferred to Fordham University in The Bronx. He said that he had always been into theater and the creative arts scene, and first realized that he wished to make film his life's work at the tender young age of 8.
“I was watching Tim Burton's Batman with Jack Nicholson and Michael Keaton and thinking to myself, ‘you can do that as a job?’ That you can make a TV show or film happen, and that people will sit and watch it,” he said. “The next day my mother took me to Gateway Playhouse in Bellport to be a part of the show, because at the time there really wasn't any film industry around here. The only real outlets were theater or music. But film, in my opinion, is the very best art form because it's an amalgamation of every other craft, and I knew it was what I wanted to do.” 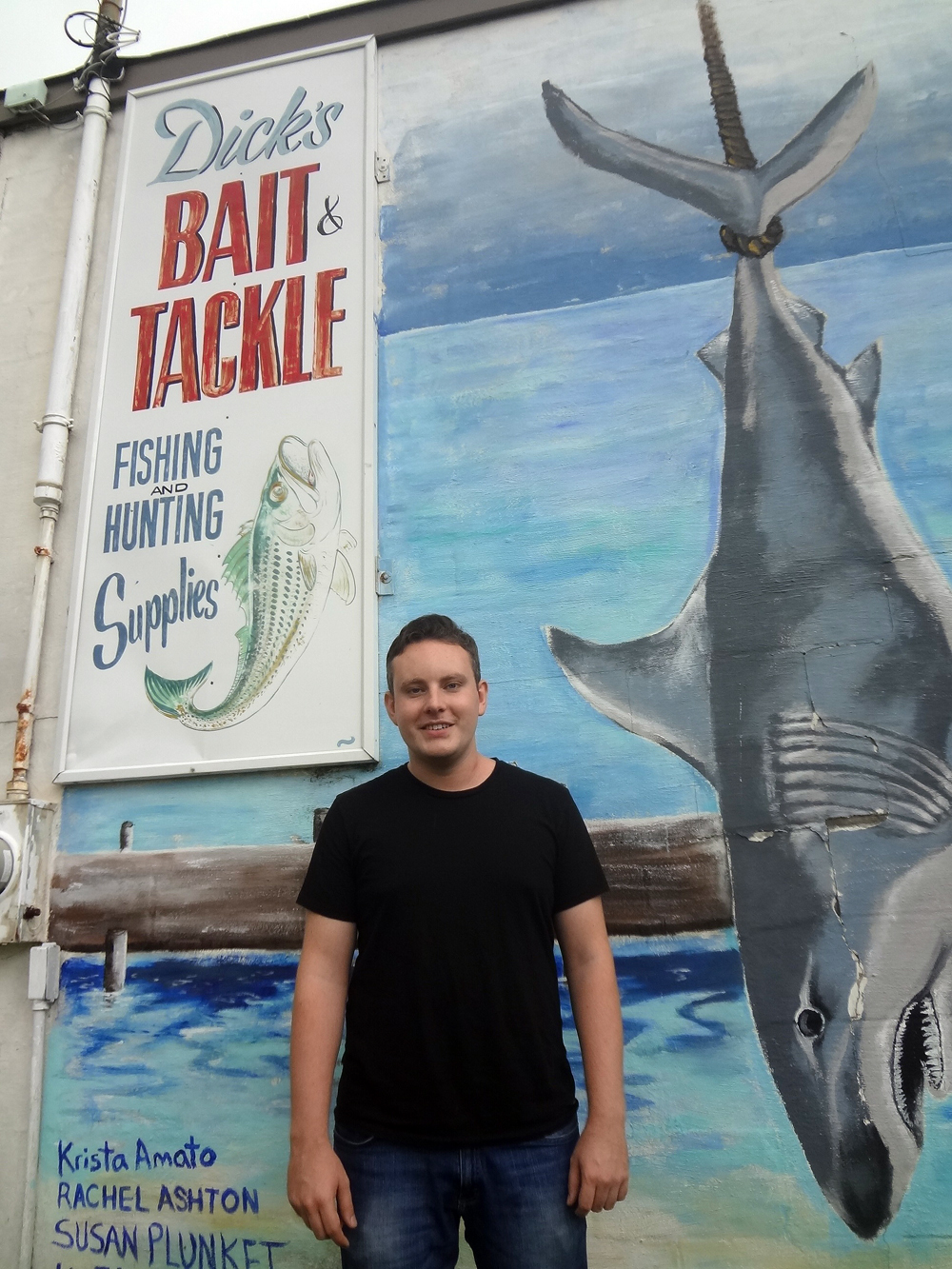 Filmmaker James Evans standing at Dick's Bait and Tackle Shop, a long-standing Mastic Beach business located on Neighborhood Road and the main shooting location for his feature film debut, Bait and Tackle. Photo Credit: Chris Boyle
Nonetheless, he was encouraged to follow a “sensible” career path, and initially pursued a degree in economics; while at Fordham he also took a screenwriting class, which Evans credits as reigniting his passion for the arts. From that point forward, steadfastly pursuing film was a foregone conclusion.
“I fell in love with it again. I always had it with me, but it was that class that told me that if I didn't go with film, I would regret it for the rest of my life,” he said. “This is a reoccurring theme in a lot of my scripts...to live the life that you want to live. So I applied to a filmmaking program through Stony Brook University, and since being accepted I've made five short films, three of which were shot here in Mastic Beach. And now this new film, Bait and Tackle, will be the launch of my career.”
All of his films thus far, Evans noted, have possessed a darkly comic bent; Bait and Tackle – the centerpiece filming location being Dick's Bait and Tackle Shop, a long-standing Mastic Beach business located on Neighborhood Road – looks to continue that tradition, with an emotionally nuanced plot that draws from his many experiences growing up in the area.
“The story is inspired loosely around the strong women who raised me, and it explores the relationships between children and parents...what does it mean to be loved? That's the question the film actually asks,” he said. “The story centers around Katherine, who is an aging widow living in a cottage by the shore and she is struggling financially. She owns a bait and tackle shop and she takes in an eccentric woman as a tenant. Plus, Katherine is suffering from stress-induced hallucinations which take her back to past points in her life – including her late husband – giving the film a non-linear narrative that nonetheless takes place in the present day.”
Cameras are slated to start rolling on Bait and Tackle in late September of this year, with filming expected to wrap up by mid-October. Post production is expected to be finished by February of 2019, after which the finished product will be shopped around the film festival scene, both foreign and domestic. In addition, Evans said that he will also be seeking potential distribution deals through streaming services such as Netflix.
Evans said that he takes inspiration from a variety of filmmakers, including Robert Altman, Hong Sang-soo, and David Lynch, just to name a few. 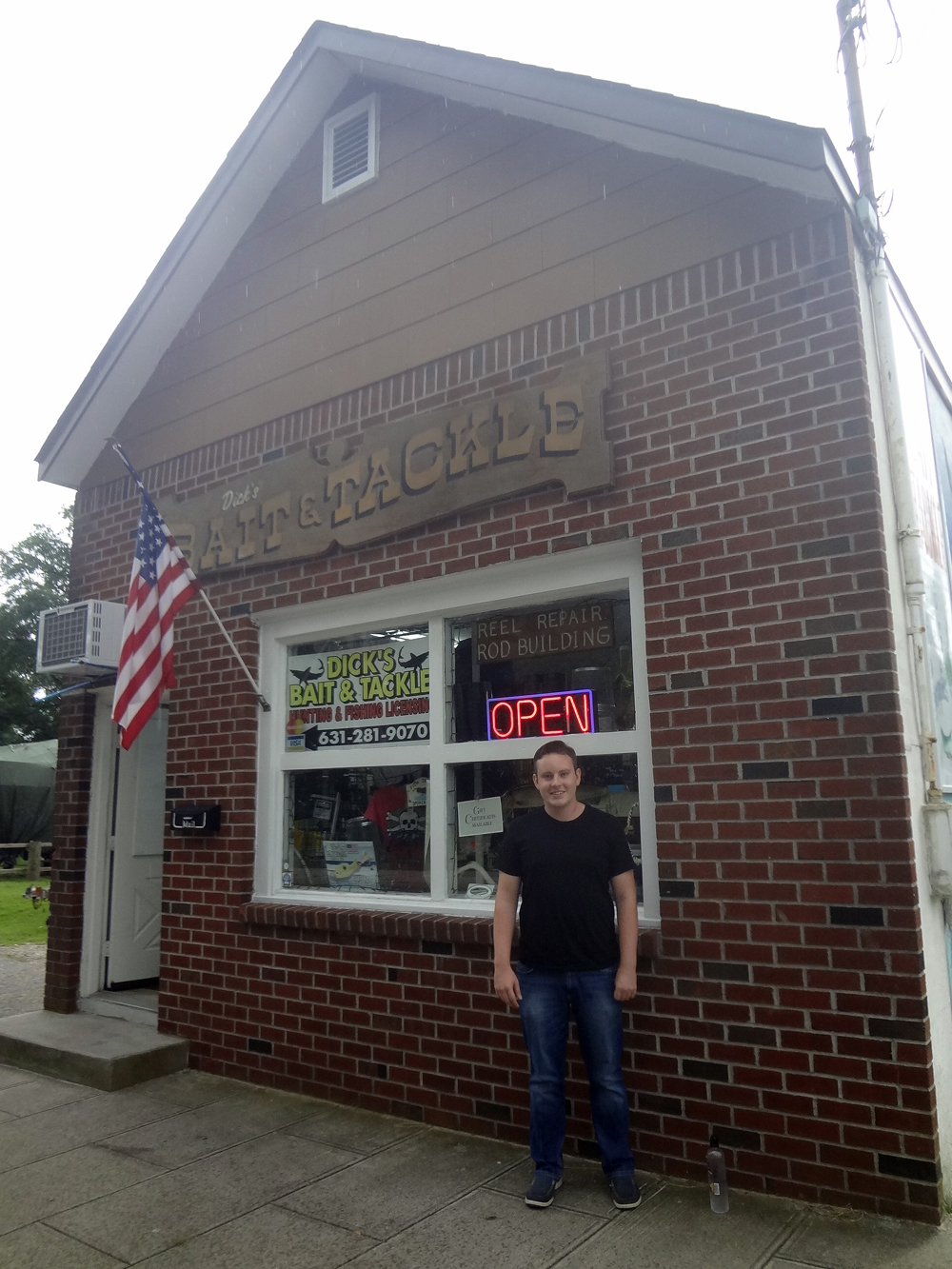 Filmmaker James Evans says that cameras are ready to rol on Bait and Tackle in lade September of this year. Photo Credit: Chris Boyle
Up until this point, all of Evans’ cinematic endeavors have been self-funded; however, he is currently in the process of acquiring financing for the production of Bait and Tackle - at a projected cost of $200,000, it's his most expensive film yet - and while a large percentage of it is coming from private investors, he is currently turning to crowdfunding efforts to procure the remainder.
“We needed an additional $40,000, and have raised $15,000 on our own. Now we're looking for help to raise the remaining $25,000. We have sponsorship forms available on Indiegogo, and we're trying to make it so this is a very local, grassroots thing. And no donation is too small!” he said. “And this isn't just about the film…this is also going to be about the launch of Donna's House Productions, which is a newly established LLC here in town.”
Donna's House – the name being a loving ode to his supportive mother – is going to be a Mastic Beach-based film production company, with Bait and Tackle technically being the first film released under its banner. However, Evans’ goal is not only using it to produce his own films, but to help other aspiring local filmmakers bring their projects to life while also bringing outside businesses and money into Mastic Beach. Such a thing is currently sorely missing from the community, Evans said, noting that Mastic Beach possesses unique and wonderful traits that would make it an asset to the film industry.
“There are a lot of hard-working, dedicated, scrappy people who live here, people who are very down-to-earth. There's something that captivates me about Mastic Beach,” he said. “I think this area is a cinematic treasure, and there are no production companies that have sound stages anywhere between Manhattan and Montauk, so there's a demand and a need for one here, and there's no reason why the Mastic-Moriches-Shirley area couldn't be a player in that industry.”
If you're interested in finding out more information about filmmaker James Evans and supporting the production of his feature film debut Bait and Tackle, visit the film's official website as well as the film’s Indiegogo page.
In addition, a fundraising screening of two of Evans’ previous short films, Brennen and Good Grief, will be held on Friday, August 31 at 7:30 p.m. at the Mastic Beach Property Owners at 31 Neighborhood Road.