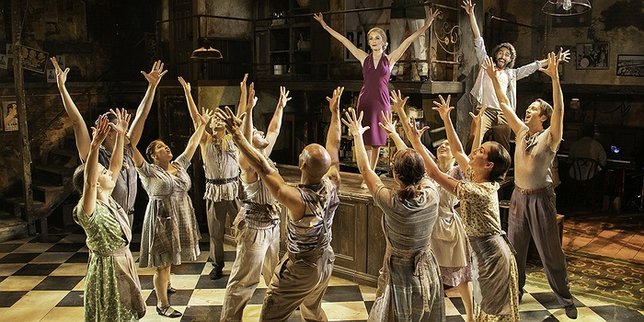 Sag Harbor, NY - August 13, 2018 - Bay Street Theater and Sag Harbor Center for the Arts is pleased to announce that due to popular demand, EVITA will be extended to run through Sunday, September 2. The play features lyrics by Tim Rice, music by Andrew Lloyd Webber. Bay Street's production is choreographed by Marcos Santana and directed by Bay Street Theater’s Associate Artistic Director, Will Pomerantz. To purchase tickets call the Box Office at 631-725-9500 or purchase online at www.baystreet.org.
This revival of EVITA takes a new look at the iconic Eva Perón and her ascent to the top as the First Lady of Argentina. Bay Street Theater offers its signature treatment of a large-scale musical - an intimate experience in a thrust theater that allows the audience to get closer to the iconic characters and dig deep into the world of and story of Andrew Lloyd Webber and Tim Rice’s masterpiece. The classic score features some of Webber and Rice’s biggest hits, including “Don’t Cry for Me Argentina,” “High Flying, Adored” and “Another Suitcase in Another Hall.”
EVITA stars Arianna Rosario (On Your Feet, Cats, West Side Story) as Eva Perón, Trent Saunders (Aladdin, American Idiot Tour) as Che, Omar Lopez-Cepero (On Your Feet, American Idiot, American Idol Finalist) as Perón, Kyle Barisich (The Phantom of the Opera, Bay Street’s My Fair Lady) as Magaldi, and Gabi Campo (The Prom on Broadway – upcoming) as The Mistress. Ensemble members are Julian Alvarez, Edgar Cavazos, Lauren Csete, Elisa Galindez, Danelle Rivera, Juan Guillen, Jose Ozuna, Dakota Quackenbush, and Carolina Santos Read.
Other members of the creative team include Aaron Jodoin (Music Supervisor), Anna Louizos (Set Designer), Mike Billings (Lighting Designer), Lindsay Davis (Costume Designer), Jon Weston (Sound Designer), Andrew Diaz (Prop Designer),Robert Bennett (Production Stage Manager), Denise Yaney (Assistant Stage Manager), and Stewart/Whitley (Casting).
The 2018 Mainstage Season is made accessible for all through special ticket offers such as "$30 under 30", which offers $30 tickets to individuals under 30 years old (sponsored by Corcoran), and "$20 under 20", which offers $20 tickets to individuals under 20 years old. Bay Street Theater also offers Free Student tickets for all Sunday matinee performances (Student ID required).
“Talkback Tuesdays” with members of the EVITA cast will take place on Tuesdays August 7, 14, and 21, immediately following the performances. After the evening performances on Saturdays and Sundays August 11, 12, 18, 19, 25, and 26, guests are invited to stay after the performance for a sing-a-long night in Bay Street Theater's lobby, in which guests can sing songs from the show together with piano accompaniment. On Sunday, August 19, Bay Street invites members of its LGBTQ audience to the 2 pm performance, with special after party to follow.
The 2018 Mainstage Season is sponsored in part by New York State through the generosity of Assemblyman Fred Thiele and State Senator Kenneth P. LaValle; the New York State Council on The Arts, a State Agency; Town of Southampton; The Harold and Mimi Steinberg Charitable Trust; The Shubert Foundation; and fully or partially funded by the Suffolk County Department of Economic Development & Planning. Support for new work comes from The New Directions Fund and the Joseph Stein New Musical Fund. Bay Street Theater's production of EVITA is sponsored in part by Baron's Cove.
For more information or to purchase tickets, log on to www.baystreet.org or call the Box Office at 631-725-9500, which is currently open daily from 11 am – showtime.
Bay Street Theater & Sag Harbor Center for the Arts is a year-round, not-for-profit professional theater and community cultural center which endeavors to innovate, educate, and entertain a diverse community through the practice of the performing arts. We serve as a social and cultural gathering place, an educational resource, and a home for a community of artists.