Access to public transportation is a civil right long denied to many with mobility issues. 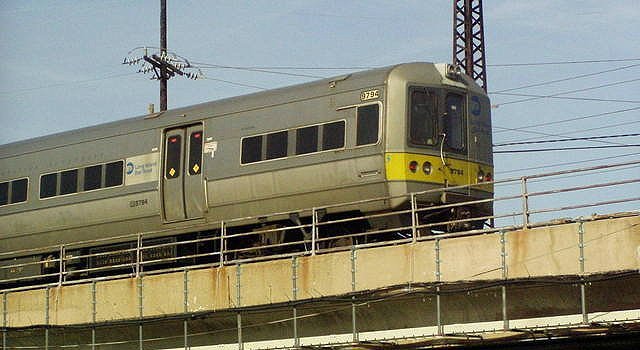 Amityville, NY - August 18, 2017 - Standing outside of the Amityville Long Island Railroad (LIRR) station today, Senator John E. Brooks and Assemblymembers Kimberly Jean-Pierre and Christine Pellegrino signed a letter to the LIRR calling on them to develop renovation plans at local stations to provide access for individuals with disabilities and comply with Americans with Disabilities Act (ADA) standards.
Nearly three decades after the Americans with Disabilities Act (ADA) was made the law of the land, Long Islanders with disability and mobility issues are still unable to access LIRR transportation at many stations.
At a recent town hall meeting, Senator Brooks met Raymond Harewood, a disabled United States Air Force veteran, who must travel five miles from his home in Amityville on his scooter, along busy streets, to reach Massapequa, the closest accessible LIRR station.  In Senate District 8, there are four consecutive stations without elevator access: Massapequa Park, Amityville, Copiague and Lindenhurst.  As a result, individuals with disabilities must travel far too many miles to reach an accessible station.
Senator John E. Brooks said, “It is unimaginable that nearly 30 years after the passage of the ADA we are pleading for citizens to obtain equal, safe access to public transportation. No one should ever have to risk their life traveling five miles to a station with elevator access, nor should anyone be subjected to navigating stairs or escalators when they are not able. It is crucial that the installation of elevators be made a top priority in LIRR station upgrade plans to improve the quality of life for all Long Islanders.”
USAF Veteran, Raymond Harewood said, “It was very disheartening for me to be stuck up on a railroad platform with no way to get down. All LIRR stations need to be accessible, not just for someone like me who uses a scooter, but for the elderly, and parents with strollers and small children. LIRR should not be making excuses or saying it will be O.K. ‘in years to come’. I’m very grateful that Senator Brooks is working to fix this.”
Brooks, Jean-Pierre and Pellegrino were also joined by Suffolk County Legislature Presiding Officer DuWayne Gregory, Amityville Mayor Dennis Siry, Independent Living, Transportation and Disabilities Advocates, and local residents affected by inaccessible LIRR stations.
Assemblywoman Kimberly Jean-Pierre said, “Long Islanders rely heavily on public transportation as a means to commute to and from our area, and access to the railroad is a fundamental right to everyone, regardless of physical ability. I am proud to join with my colleagues in calling on the MTA to complete the installation of elevators at these LIRR stations.”
Assemblywoman Christine Pellegrino said, "Veterans, children and all people that are unable to navigate stairs or escalators have the right to access the Long Island Railroad. I am calling on the MTA to implement an upgrade to these stations that is long overdue and make them fully accessible. This is one of many issues that we need to improve to make the LIRR work better for Long Island families."
Suffolk County Legislature Presiding Officer DuWayne Gregory said, “It is truly disappointing that almost three decades after the ADA was signed, many of our most vulnerable residents are still fighting for equal, safe access to something as critical as public transportation. I want to thank Senator Brooks for bringing attention to this important issue.”
Mayor Dennis Siry, Village of Amityville said, “Unfortunately, MTA bases their priority of maintenance and improvements on ridership. This leaves the smaller villages, where ridership is lower than larger populated towns, at a disadvantage. In our Village’s case, we are left lacking what we consider necessary amenities and important quality of life issues. We are looking forward to working with the MTA to rectify their policy and procedures so they are deemed equal and nondiscriminatory to all MTA riders.
Frank Krotschinsky, Director, Suffolk County Office for People with Disabilities said, “County Executive Bellone is committed to making Suffolk County more accessible to people with disabilities, and that includes the train stations. We look forward to working with the MTA to make the Amityville Long Island Railroad train station, as well as all the train stations, accessible and convenient for all our residents and visitors.”
Therese Aprile-Brzezinski, Director of Planning and Public Policy for the Long Island Center for Independent Living, Inc. said, “People with disabilities are entitled to ride the train with the same level of service, safety, choice and convenience as those without disabilities. The Americans with Disabilities Act (ADA) made that clear when it was signed into law 27 years ago this past July.  At long last, the LIRR must pledge to work together with citizens with disabilities and community leaders to create a commuter landscape where every station is equipped with a working elevator.”
Edith M. Prentiss, Disabled In Action of Metro NY said, “Long Islanders with disabilities are at a unique transportation disadvantage. Increasing the accessibility of the MTA / LIRR would have a tremendous impact.”