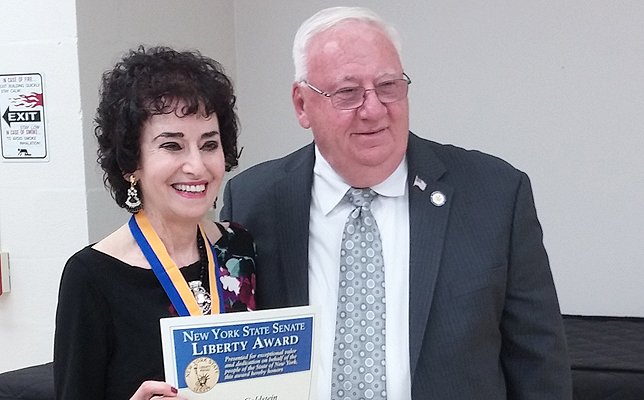 Long Island, NY – June 14, 2017 – Senator John Brooks presented the New York State Liberty Medal to Francine Goldstein of North Merrick on Thursday evening.  The New York State Liberty Medal award program is the highest civilian honor that can be bestowed by a Member of the New York State Senate upon a resident of New York State. Ms. Goldstein was recognized for her selfless commitment to fighting the AIDS virus after it claimed the life of a dear friend nearly three decades ago.  Over the past 28 years, Ms. Goldstein has raised more than half a million dollars individually.
Senator Brooks remarked, “Francine Goldstein is an unsung hero who grasps onto a life mission to help others, not for glory or profit, but to alleviate suffering and provide assistance to others who might otherwise be uncared for. Francine's selflessness and consideration of others is something to be admired and respected. I am proud to recognize her remarkable commitment and accomplishment.”
Ms. Goldstein said, “I was really thrilled that Senator Brooks was kind enough to recognize me for the work that I have done for AIDS Walk New York over the past 29 years. John knew the story of the friend that I had lost and the promise that I made to her that I would prevent others from suffering the way that she did. I thank the Senator for being just as caring and dedicated to the community that he serves. We need more people like him in public service that truly care about the needs of their constituents.”
Francine Goldstein set out nearly 30 years ago to raise funds for multiple local HIV/AIDS advocacy programs and service organizations such as the GMHC, and she has never wavered from her mission. She has been an active participant of AIDS Walk New York for the past 29 years, raising thousands of dollars to fight the virus that took the life of her best friend. She has helped inspire thousands of people to walk, and millions more to donate, helping raise nearly $150 million in contributions to combat HIV and AIDS. The funds raised provide for the care of thousands of men, women and families in the tri-state area affected by the disease.