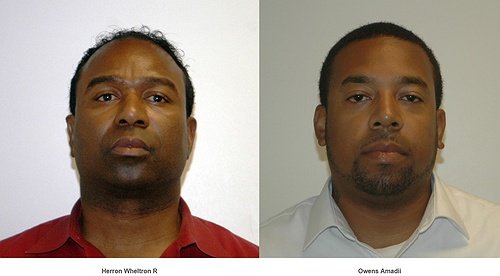 If convicted Herron and Owens face a sentence of up to 15 years in prison, and the Herron Foundation Inc. faces a fine of up to $20,000.

“That these defendants allegedly used a sham charity to pocket funds promised to teenagers who were trying to earn some honest money is despicable,” said Acting DA Madeline Singas. “These defendants allegedly took money from a program intended for worthy charities, promised it to kids for their labor, and instead stole from both. I want to thank the Freeport School District for bringing this important case to our attention.”

“After it became known that this was a serious matter involving our students, we contacted the Nassau County District Attorney’s office and continued to work closely with the DA’s office during their investigation,” said Dr. Kishore Kuncham, Superintendent of Schools for the Freeport School District. “We thank Acting Nassau County District Attorney Madeline Singas and her team for their prompt attention and efforts to ensure the rights of our students were protected and justice was served. “

Records show that the Herron Foundation was incorporated in April, 2013, by Whelton Herron “for the charitable purpose of aiding students in grades K-12 who reside in impoverished communities and are in need of academic intervention, mentoring or other supplemental educational services by providing such students with web-based or live individualized tutoring services, self-motivation and confidence building skills programs, and church or community based volunteer leadership opportunities.”

In 2013 and 2014, Herron applied to the Non-Profit Program operated by the Aramark Sports and Entertainment Services Inc. In contracts, Herron represented that The Herron Foundation was a non-profit, tax-exempt 501(c)(3) charity seeking to “engage in fund raising for civic, charitable, religious or educational purposes through the conduct of concessions operations” in exchange for which the Herron Foundation would receive commissions based on a percentage of the total “gross receipts from the Concessions Operations.” In the contracts, Herron agreed to provide volunteers to work at Aramark concession stands who would be required to indicate to Aramark that “he/she is providing time and effort for the benefit of Group, without intention of receiving wages or benefits.” The contracts further stated that, “In addition, Group shall not provide any compensation or benefits to its volunteers of any kind or nature in regard to their services hereunder, including, without limitation, reimbursing volunteers for their cost and expenses (such as child care or transportation costs).”

Despite the contracts, the defendants falsely represented to Aramark representatives that students were providing services as volunteers with no expectation of being paid for their work.

Defendants allegedly told students that they would be paid by the Herron Foundation as Herron employees but were considered “volunteers” by the Aramark Corporation. The defendants instructed Herron workers that if asked by any Aramark representatives, they should state that they were “merely volunteers for the Herron Foundation” and were not being paid for their services.”

Defendants arranged for students to work hundreds of hours at Aramark concession stands in Nassau County, New York City, and venues in other states, and they were not paid by the defendants, in part or at all, for their services. When questioned by Herron workers about the failure to pay earned wages, the defendant Whelton Herron or Owens falsely represented to the Herron workers and others that the Herron Foundation had not yet been paid by Aramark for the hours worked.

In May 2014, the Freeport High School students started working at Jones Beach and Citi Field. They paid for their own transportation or in some cases, parents shuttled the kids to and from the venues, often at late hours after events ended. The students worked hundreds of hours, usually in shifts of five to eight hours.

In June 2014, the Freeport students had not been paid. When students requested payment, Owens called a meeting at the Freeport Library and threatened to fire any student that alerted Aramark employees that they were owed payment by the Herron Foundation.

In July 2014, the students continued to ask for payment. This time, defendants lied and again told them that Aramark had not yet paid the Herron Foundation and that the workers would be paid when the money was received from Aramark. Some received money orders for $36, a mere fraction of their wages.

In August 2014, when Freeport High School students informed faculty that they had not been paid, or paid for just a small fraction of the hours they worked, faculty members contacted Owens and Herron. Both defendants promised that once Aramark paid The Herron Foundation, the students would be receiving their promised payment. Some students received additional $36 money orders. Others received nothing. In total, nearly $30,000 is owed to the Freeport students.

In 2013 and 2014, based on false representations, Aramark paid the Herron Foundation in excess of $100,000.00 under Aramark’s Non-Profit Organization program, which bank records show that defendants used for personal purposes, including the purchase a Mercedes Benz, travel, and the creation of a golf cart web magazine.

The investigation is ongoing, and includes allegations of tax fraud and Labor Law violations. Victims are encouraged to contact the Nassau County District Attorney’s office at (516) 571-3505.

This case is being prosecuted by Economic Crimes Bureau Chief Diane Peress and Assistant District Attorneys April Montgomery and Connie Gentile. Owens is represented by Greg Madey, Esq. Whelton Herron and The Herron Foundation are represented by Joseph Megale, Esq. The charges are merely accusations and the defendants are presumed innocent until and unless found guilty.