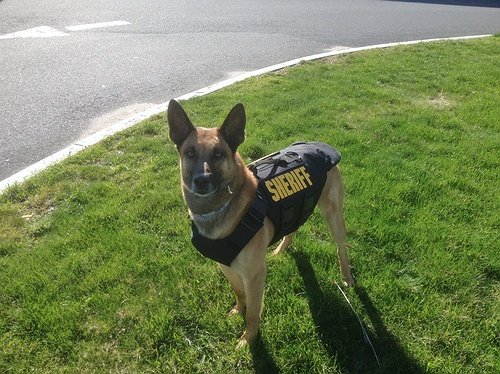 Two Suffolk County police dogs were fortunate enough this summer to receive brand new bulletproof vests through the support of Vested Interest in K9s, a non-profit organization dedicated to providing the dogs of law enforcement with life-saving body armor. Since its founding in 2009, Vested Interest has provided over 1100 American-made protective vests, at a cost of $1,045,000, to dogs all around the country.

Bob, of the Suffolk County Sheriff’s Department, and Thor, an explosives detector for the Suffolk County Police Department’s canine unit, received their vests with the help of a donation provided by the Romano family in memory of William Romano, a retired Decorated Detective and member of New York City Police Department Elite Crime Scene Unit. The Romanos covered the entire cost for both of the $950 vests.

The vests, which protect against gunfire and stabbing, shield the dogs from potential harm in dangerous situations. Like a traditional bulletproof vest for human officers, these pieces of modern body armor can protect police dogs when and where they are most vulnerable.

“For high risk situations where we might be doing a building search, we believe there might be someone in there that’s armed, we’d deploy the vest for that,” said Lieutenant Brian Coltellino, commanding officer of the SCPD canine unit. “These newer vests are very light weight…I think they only weigh about 2 or 2.5 lbs. As we work with this vest we may find that the newer ones are a better alternative and that we can use them in more situations.”

For now, the unit is working with Thor’s new lightweight vest as well as two older ones which are not sized for any particular dog.

According to Lt. Coltellino, the young German shepherd has lived up to his name in his short time with the force.

“He fits the name,” Coltellino said. “He’s either the biggest or one of the two biggest dogs that we have in the unit, he’s a big boy. He’s a young dog, he’s been in service I think about a year-and-a-half now, and he’s had more than his share of apprehensions. His handler is an excellent officer, as are all of my handlers. He’s really doing very well.”

In addition to chasing after criminals in high risk situations, Thor and his canine colleagues are employed to perform a number of tasks by the SCPD, much of which is related to tracking.

“All of our dogs are trained in patrol which is kind of your traditional police dog work,” Coltellino explained. “They can track bad guys, they can track missing persons, they can track lost children, they can recover evidence. They’re trained to indicate a fresh human scent. They do handler protection, bite work, criminal apprehension, and then at some part in their careers each of our dogs will also get a specialty. They’ll either be trained as drug detection, explosives detection, or human remains detection canines—so it’s an additional skill and they’ll only get one of those.”

Suffolk County exclusively employs German shepherds as police dogs, as the canine unit has found them to be better trackers than Dutch Shepherds or Belgian Malinois which have been used by other police forces.

“Our bread and butter, our most important focus is tracking,” Coltellino said. “For that we look for a dog that will keep his nose down to the ground, that will use his nose—he won’t be a site dog. That’s one of the things we found in the past with the Malinois; Malinois tend to not stay with the track quite the same way a German shepherd does. They can be very good dogs, you can find very good Malinois, but for us we find the German shepherds as a group keep their nose down to the ground well and stay with the track. They don’t get frustrated; they’re not quite as high strung as the Malinois is.”