Police say a man entered the bedroom of an underage girl; police are searching for the person who spray-painted graffiti in Dix Hills. 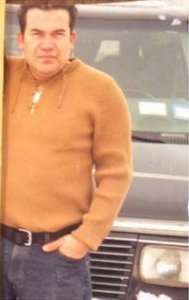 Police Searching for Sexual Predator in Roosevelt
According to the Nassau County Police Department, a man is wanted in connection with a sexual abuse case that occurred in Roosevelt on Wednesday.

Elmer Mata (pictured right) allegedly entered the bedroom of an underage girl while she was sleeping. Officials said that 45-year-old Mata then pulled the girl’s clothes down and touched her buttocks. Mata then warned the victim - who was not named by police - not to tell anyone about the incident.

Mata was not a scene when police were called. Police are asking anyone with information regarding his whereabouts to contact Crime Stoppers anonymously at 1-800-244-TIPS (8477). Mata is described as Hispanic, 5’5” tall and 190 pounds. He works in construction.

Swastika Spray-Painted in Dix Hills
The Suffolk County Police Hate Crimes Unit is searching for the person responsible for spray-painting graffiti (pictured below) in Dix Hills. Several road signs were spray-painted, and a swastika was also spray-painted on a garage door located at Ryder Avenue in Dix Hills.

According to officials, the graffiti was spray-painted between February 3 at 6:30 p.m. and February 4 at 7 a.m. Police have not yet identified the culprit, and are asking anyone with information regarding the vandalism to contact Suffolk County Crime Stoppers anonymously at 1-800-220-TIPS (8477).

Police are offering a cash reward of up to $5,000 for any information in connection with this crime that leads to an arrest. All calls to Suffolk County Crime Stoppers will be kept confidential.