Funding will Eradicate Invasive Weeds that have Contributed to the Decline of the Lake. 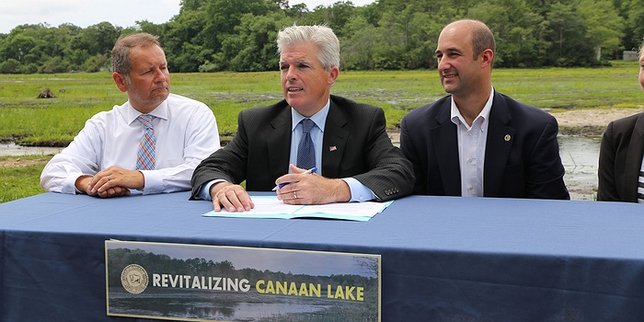 Suffolk County, NY - July 27, 2018 - Suffolk County Executive Steve Bellone today signed legislation to fund the second phase of the Canaan Lake Restoration Project, a project designed to clean up the 24-acre Canaan Lake and restore it to its previous recreational use. The $1.5 million in funding for Phase Two will build upon the Phase One efforts and be used to purchase the necessary equipment for site improvements, scraping of the lakebed, and disposal of sediments. The removal of invasive plant species is necessary for the health and restoration of the lake.
“Canaan Lake was once a site that our residents and visitors were able to enjoy numerous outdoor activities, including swimming, fishing, and boating,” said Suffolk County Executive Bellone. “After decades of decline, we are committed to restoring this lake, and restoring it in the most environmentally friendly way possible. Preserving the quality of water across the County is a top priority, and we will continue to make the necessary investments to improve our water for generations to come.”
Deputy Presiding Officer Rob Calarco said: “I am pleased to join the County Executive in announcing the approval of the recent $1.5 million bond.  This critical funding will allow the county to take the next step in restoring the natural habitat of Canaan Lake, by removing the muck and invasive plants that have built up over time. Watching the project unfold from the draining of the lake in the spring, to seeing how it must have looked hundreds of years ago before the stream was originally dammed, and ultimately being restored to a clear and clean lake as it was enjoyed for generations is truly rewarding part of being involved in government.”
Over the past several decades, the highly invasive Cabomba weed and watermilfoil crowded out the lake’s native plant species, which has severely hampered the natural habitat and recreational uses of the lake. In an effort to restore the lake, the Canaan Lake Restoration Project was designed to examine the most efficient and effective ways to clean-up the lake and remove the invasive species, while also being environmentally conscience. Due to significant operational issues, dredging of the lake was not a possibility and the County decided to go in a different direction.
Phase One of the project began in 2017 with the installation of a culvert under Traction Boulevard which was used to help lower the water level of the lake. Suffolk County Department of Public Works worked with New York State Department of Environmental Conservation to obtain a permit to lower the lake in order for the sediment to be removed with traditional heavy highway earth moving equipment. During May of this year the lake was drained of approximately five feet of water in an effort to dry out and kill-off the invasive plant-life that has been polluting the lake for decades. Over the course of the summer months, the lake bed has begun to dry out and once completed Phase Two of the project can begin.
Phase Two consists of removing the invasive plant life, scrapping the bottom of the lakebed, and properly disposing of the sediment. There is a total of approximately 30,000 cubic yards of sediment to be removed from Canaan Lake. The removal of the sediment will be done in two phases. Phase 1 will remove approximately 12,000 cubic yards of sediment that will be disposed of at the Brookhaven landfill.  In addition, the next phase will remove the remaining approximately 20,000 cubic yards of contaminated material.  Suffolk County Department of Public Works will perform soil tests and work with the New York State Department of Environmental Conservation to determine whether the contaminated materials could enter the Brookhaven landfill or if the materials must be shipped off-Island to a hazardous material site.