Terrorists have claimed responsibility for attacks on two Iraqi prisons which freed an estimated 500 detainees. 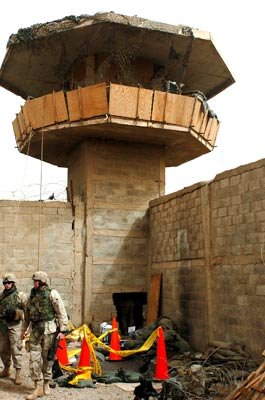 Attacks on the Abu Ghraib and Taji prisons in Iraq were carried out late Sunday night, freeing an estimated 500 prisoners in the chaos. Among them were several high-ranking members of al-Qaeda, most of whom had been given death sentences.

The raids were the largest part of a tumultuous night in Iraq: at least 13 people were killed elsewhere throughout the country as shootings and late-night car bombings caused a great deal of bloodshed. During the fasting month of Ramadan, cafes and other shopping areas are often quite busy after sundown; the attacks were likely coordinated to hit as many civilians as possible while the streets were at their busiest.

11 car bombs were detonated in Baghdad just one night prior, and a checkpoint manned by Kurdish security forces was attacked in broad daylight on Sunday, killing 5.

Yesterday, the Islamic State of Iraq—the Iraqi branch of al-Qaeda—claimed responsibility for Sunday’s prison breaks, stating that it had been preparing the raids for months. Iraq’s interior minister said that some of the guards on duty aided the attackers.

A statement from the interior said “There has been a conspiracy between some of the guards of both prisons and the terrorist gangs that attacked the prisons. That was one of the main reasons for the escalation of events which led to these consequences.”

Over 50 people, including 26 guards and soldiers, were killed as gunfire raged and suicide bombers detonated in the prisons. 500 prisoners are believed to have initially escaped from Abu Ghraib alone, but officials said that 150 of them have already been recaptured. A manhunt is underway for the remaining escapees.

The attacks come a year after the Islamic State of Iraq stated it would be targeting the justice system, and is one of the most serious threats the country has faced from the al-Qaeda outlet in years.

Taji is located north of Baghdad; Abu Ghraib is on the western outskirts of the capital city. Abu Ghraib was used as a torture facility under Saddam Hussein’s rule and gained furthered infamy when photographs of US soldiers abusing and humiliating detainees leaked in 2004.