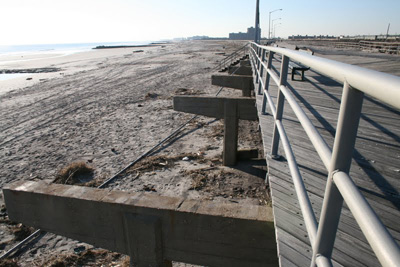 The senators are pushing the “Hurricane Sandy and National Disaster Tax Relief Act of 2012” through Congress, announced just one day after President Obama asked Congress to provide billions in relief aid to the states impacted by Sandy, with the hopes of advancing the bill before the fiscal cliff debates expire.
The bill would allow taxpayers to deduct all storm clean-up expenses, among other measures.   The 10 percent penalty for withdrawing from retirement plans early will be waived, and those who offered free housing for Sandy victims for at least 60 consecutive days can claim a $500 tax exemptions up to four times.  Businesses in the storm region with fewer than 200 employees who continued to pay employees will also be offered a tax credit.
“It means if you have to pay to have your home repaired, or have someone come and pick up the debris or cut down badly damaged trees, those expenses can be deducted from your taxable income,” Senator Schumer said at a press conference.
"I know we’re closer to the starting line in this painful process of recovery than the finish line, but unveiling this bill is an important next step in our region’s recovery,” Senator Menendez said in a statement.
How much the tax relief will cost remains unclear, and is separate from the $60.4 billion aid package President Obama announced on Friday.  It is also uncertain how the Republican-controlled House will approach the bill.  The bill covers the expense of all natural disasters occurring in 2012.
Share your thoughts on this article by posting a comment below or by visiting our Long Island Living discussion forum.