A car bomb and gunmen left many dead in the city of Kirkuk. 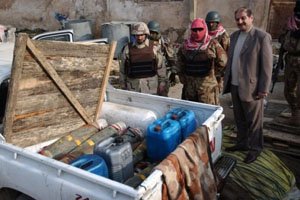 A suicide bomber detonated a truck full of explosives outside a police headquarters in Kirkuk, Iraq on Sunday. Numbers have been variable thus far; police reports indicate 33 people were killed by the blast, while a local health official said only 16 bodies were brought to the morgue and 90 others were wounded.

Following detonation, a group of gunmen clad in explosive vests charged the station, but were quickly killed by on-duty guards before they could enter the building.

In a separate incident, four people were shot dead last night as they watched over a private generator for their region of Kirkuk. Electrical service in Iraq is unsophisticated, leaving long stretches of time without power and forcing most citizens to rely on a series of private generators for energy.

No parties have claimed responsibility for the attacks yet, however Kirkuk is a volatile section of the country. Located 150 miles north of Baghdad, its borders are disputed between the larger Republic of Iraq proper and the independently run Kurdish region of the nation’s North, as well as by the city’s minority Turkmen.

Car bombs are popular weapon among Sunni insurgents such as al Qaeda’s local branch, the Islamic State of Iraq, which is opposed by the Iraqi police. Though the organization had been weakened by years of fighting with the US military, it has recently regained some strength through an influx of Sunnis and armaments into adjacent Syria. The group has been the source of several bombings and attacks in recent months.