A booming grand slam highlighted the week for both the Mets and Yanks, though neither team was without its blemishes. 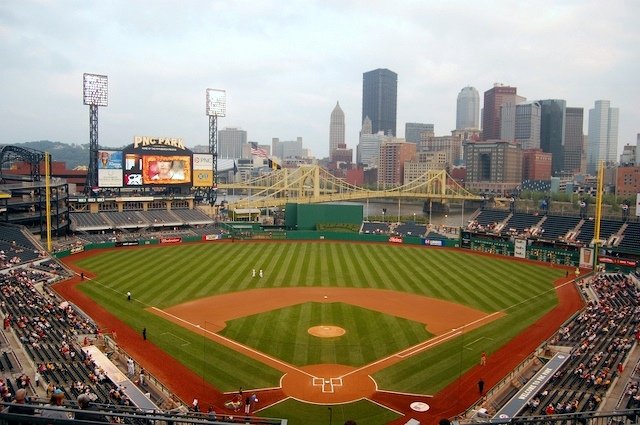 The Mets were likely short on sleep after traveling to San Francisco and playing a 16 inning game against the Giants on Monday night. They looked sluggish at the start of Tuesday’s follow up; as Brandon Belt attempted to steal 2nd base in the second inning a Recker throwing error let Hunter Pence score. Belt came in to score on the next play, putting the Giants ahead 2-0.

9 of 10 Mets were retired in the first three innings, but they loaded the bases in the fourth, allowing Andrew Brown to drive in 2 on a single to left field. Omar Quintanilla notched an RBI single of his own, putting New York ahead 3-2.

San Fran tied the game in the fifth, but Recker made up for his error with a 2-run homer in the sixth. Dillon Gee gave up another run in the bottom of the sixth and one more before being taken out in the seventh, tying the game at 5-5. The eighth inning would make a massive difference, however—after Daniel Murphy broke the tie with a sacrifice fly to bring in Quintanilla, David Wright walked to load the bases. Marlon Byrd came to the plate and knocked the first pitch he saw out of the park, putting New York ahead 10-5 as he smashed in his 7th career grand slam. The Giants did score a run in the ninth, but that was far from sufficient to retake the lead; the Mets won 10-6.

The team picked up right where it left off on Wednesday’s close to the series. Eric Young walked a work to begin the first inning, then stole 2nd and scored on a Murphy single. Later in the inning, a John Buck single brought Murphy and Ike Davis home as the Mets jumped out to a 3-0 lead.

Bats from both dugouts went quiet until the fifth inning when Byrd brought Davis home with him on a homerun that put NY ahead 5-0. Zack Wheeler, who had blanked the Giants through 5 innings, scored Buck on a double in the sixth, then came home on a Murphy double to go up 7-0. Wheeler would allow a run in the seventh inning—which he pitched to completion—and LaTroy Hawkins gave up a second in the ninth before finding the last out of the game. The Mets swept the series by virtue of the 7-2 victory, and Zack Wheeler collected his 3rd win since being called up to the Majors.

The Mets travelled to Pittsburgh yesterday for their last series before the All Star break, which will see its annual festivities held at the team’s home in Queens this year. Jeremy Hefner gave up a 2 run homer in the first inning, but settled down afterwards, working 1-2-3 innings from the second through the fifth. He allowed a 1-out double in the sixth, though it did no damage as he retired the next two batters and all three in the seventh.

For the rest of the team’s part, Wright singled Eric Young home in the sixth inning and Kirk Nieuwenhuis homered in the seventh, tying the game at 2 apiece. That score held through the eighth and the ninth, once again forcing New York into an extra innings game. Still tied 2-2 in the bottom of the 11th with 2 on and 2 outs, recently activated Mets reliever Gonzalez Germen gave up an RBI single to Jordy Mercer. New York lost 3-2 and Germen ended his MLB debut on a sour note.

The series will continue at 7:15 PM tonight, and the Mets will play their last game before the break at 1:35 PM tomorrow.

Yankees Regain and Re-lose Jeter, Defeat Twins Without Him

Following a 5-1 loss against the Royals on Monday, the Yankees struck early on Tuesday when Robinson Cano scored Brett Gardner on an RBI single in the first inning. Zoilo Almonte singled to load the bases with 1 out, but James Shields worked himself out of trouble, limiting the damage to just the 1 run.

Unfortunately the Yanks could not find another run in the proceeding innings either. CC Sabathia gave up a leadoff homer in the sixth, another in the seventh, and an RBI double in the eighth. He did afford the bullpen some rest by pitching a complete game, though that was likely of little solace as the 3-1 defeat dealt him his 7th loss this season.

Wednesday’s game got off to a somewhat similar start with Gardner scoring the first run in the first inning, this time on a wild pitch. More run support was provided for Ivan Nova than for CC, however; Cano launched a 3-run homer in the third inning to put the Bronx Bombers ahead 4-0.

Despite the impressive blast, it was Lyle Overbay who stole the show when his fourth career grand slam put New York ahead 8-0 in the sixth inning. Coming off his first career complete game, Nova pitched 8 whole innings and allowed just 1 run which came on a double in the eighth. Joba Chamberlain worked a scoreless ninth, giving the Yanks an 8-1 victory and Nova his 4th win this season.

That win snapped a 3-game skid for the Yanks and set them up for a chance to tie the 4-game series with Kansas City. The team doubtlessly gained a boost of confidence when it was decided that Derek Jeter would play his first game in pinstripes since breaking his ankle last October.

Andy Pettitte let in 3 runs in the top of the first on Thursday, but the Captain played his part as DH by knocking in the first Yankees’ hit with a single in the bottom of the inning, then put them on the scoreboard when he came home on a Vernon Wells sacrifice fly. Pettitte allowed the spread to jump back up to 3 in the second inning, however Austin Romine and Ichiro Suzuki drove in 2 runs in the bottom frame on a double and a single respectively.

Still down 4-3 in the bottom of the fifth, Overbay gave New York its first lead on a 2 RBI single. Almonte added to the lead with an RBI single of his own, and Eduardo Nunez followed suit before Almonte was thrown out at 3rd.

Andy stayed on to start the sixth, though he was taken out after two batters. Jeter put the icing on the cake when he knocked in the Yanks’ 8th run on a groundout in the bottom of the inning. That score held, the Yankees went on to win 8-4, and Pettitte got his 7th win, but on his last at-bat Derek injured his right quadriceps in trying to beat out the groundball.

Gardner took over the DH spot for what would have been Jeter’s fifth time at the plate, and an MRI later revealed the injury to be a Grade 1 strain. Jeter’s injury will prevent him from playing any more this weekend; his situation will be revisited after the All Star break.

Yet another devastating injury dampened the spirits of fans across New York yesterday, and the team had to play in some pretty wet conditions itself last night. Thankfully, the bad weather came to town with the Minnesota Twins, who the Yanks swept to break out of an extended slump just last week.

Hiroki Kuroda started the game, pitching four shutout innings in inclement conditions before an over hour-long rain delay set both teams on the bench as they tried to wait out the storm. Amazingly, he returned to pitch the fifth even as the rain continued to fall; after getting the first two hitters out he allowed the next two to reach base before picking up the third out.

Since Kuroda came back after the rain delay, he was the pitcher of record when Gardner singled in the first run of the game in the bottom of the fifth. Cano made it 2-0 with an RBI single, and the bullpens went to work from that point forward. David Robertson struck out 2 of the 3 batters he faced in the eighth, and Mariano Rivera worked a 1-2-3 ninth to give the Yankees a 2-0 win and pick up his 30th save. Kuroda earned his 8th win, improving to an American League-best 2.65 ERA in the process.

The Yankees will continue their series with Minnesota at 1:05 PM this afternoon and finish out their last game before the break at the same time tomorrow.