Governor Andrew M. Cuomo today announced that Downtown Westbury was selected as the winner of the $10 million Downtown Revitalization Initiative in the Long Island region. 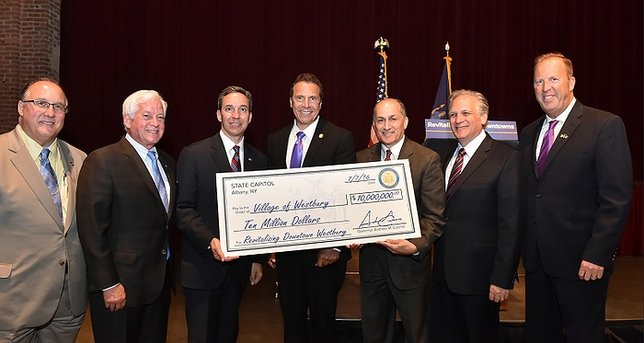 Westbury, NY - July 7, 2016 - Governor Andrew M. Cuomo today announced that Downtown Westbury was selected as the winner of the $10 million Downtown Revitalization Initiative in the Long Island region. The Downtown Revitalization Initiative, first laid out in the Governor’s 2016 State of the State address, marks a comprehensive plan to transform local neighborhoods into vibrant communities where the next generation of New Yorkers will want to live and work. 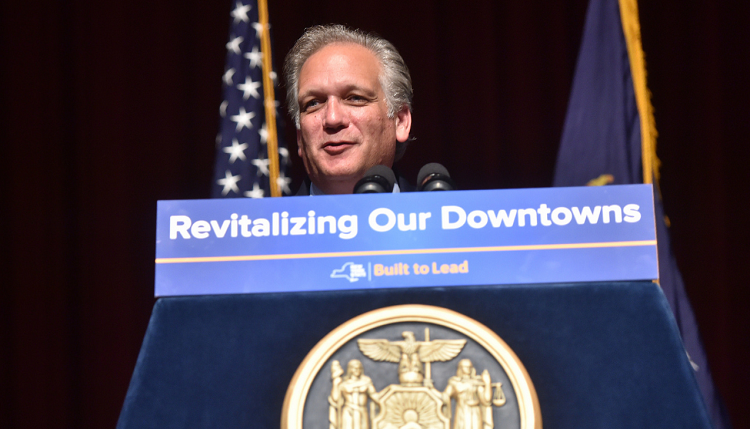 The winner was selected as part of a competitive process by the state’s Long Island Regional Economic Development Council and will receive $10 million in state funding to revitalize the local neighborhood and generate new opportunities for long-term growth and prosperity. The award will include up to $300,000 in planning funds for private sector experts to work with a local planning committee to draft a Strategic Investment Plan that will identify specific economic development, transportation, and housing and community projects. The grant is part of a $100 million effort to improve the urban vitality of urban centers across the state. Plans will be completed by early 2017.

A rush transcript of the Governor’s remarks is below:

Thank you, thank you. Thank you very much, thank you very much. It is my pleasure to be back in Nassau. It is my pleasure to be in Westbury. And of course to your Mayor who is doing an extraordinary job or else we would not be here today. Let’s give the Mayor a round of applause. County Executive Ed Mangano, who is doing a great job and who has been a great partner to work with me on the state side. Ed Mangano. My colleagues from Albany in the Senate and the Assembly- we have Senator Jack Martins, we have Assemblyman Chuck Levine and we have Michael Montesano. It is a pleasure to be with you gentlemen.

I am excited to be here. We had a great legislative session this year. A legislative session goes from January to June. The legislature leaves in June. We had one of the most productive legislative sessions this state has had in decades. We got a lot of good work done. First, we got the budget done on time. We stayed within our 2 percent spending cap, which is saying something. We avoided the gridlock, which seems to be the illness of the day. It is a virus that affects governments all across this county and has paralyzed the government in Washington. We have our differences with Democrats, Republicans, and et cetera. But we are New Yorkers first and we act that way and we do not allow our politics to get in the way of doing the people’s work. I applaud my colleagues for that.

We really did have a great record at the end of the day. More money for education than ever before in the history of the state of New York. We raised the minimum wage, we passed the best paid family leave program in the United States of America that allows people to work, but also tend to their families. We addressed the scourge of heroin and opioid addiction, which is only getting worse and is a significant problem here on the Island as you know. We have the best program in the country for breast cancer and attacking breast cancer. So a lot of great work.

But the thrust for us is always economic development; Why? Because if the economy is running and if you are developing jobs, basically that is the engine that pills the train. If you are developing jobs, there is opportunity. If there is opportunity, people are moving in, young people are staying. If there are jobs then they are creating revenue which means the county is happy and the Mayor is happy and they leave us alone. So the thrust is always about economic development. And the state has done its part – we have reversed our image from New York, a high tax state, the anti-business state. We have cut taxes in every income bracket. Everyone in the state pays a lower tax rate today than they did five years ago and we are proud of that. This year we cut taxes for the middle class -- large definition of middle class -- up to $300,000, the lowest tax rate in 70 years, believe it or not. So we are doing what we need to do on the state level. But we also understand that economic development does not really happen on the state level. The most important thing in life to know is to know what you do not know, to know your limitations.

Economic development region by region is happening more and more around the state. We have the Buffalo region, we have the North Country region, we have New York City, we have Nassau. And these are all different. And they have different needs and there are different assets and different liabilities and they have different strategies, so we say to the local governments – you tell us what you need, and you tell us how to help you rather than we stay in Albany and dictate what you should do. We reverse the economic development strategy that we used in the past and we look to local governments and we do something else. We do not have enough money to fund every local government’s wish list, so we run competitions. We know for example that Economic development, more and more, is coming around vibrant downtown centers. You look at where the economy is growing, if you show me a downtown that is growing and is incentivized, that’s where the job is going to go. Now, we cannot fund every downtown development project in the state. So we run a competition. And if you have limited money you want to make sure that you are investing in the best programs. Tax money that we spend, that’s citizen’s money, put it in the best place possible. So we said to the local governments across the state, you give us your best plan for your downtown revitalization and we will partner with the best. We had 122 applications in the state and there were only 10 slots for ten winners. I have told communities that were not successful, that did not get funded, “Even though you didn’t get funded, I still think the exercise was worth it.” To come together, how do we grow our downtown, develop partnerships, develop strategies? So the exercise itself, going through the competition, was a good one. Obviously, it is better if you win, and obviously I would not be here, except to tell you that you won. Congratulations.

The top amount was $10 million award, and you won the $10 million award to realize your dream. And I just wanted to be here today to say to all of you congratulations. And it was really a job well done. You hit all the touchpoints, you incorporated every strategy in your development plan - that we know works. You have a transit oriented development plan. I am even more excited about how it can work when we get the third track done for the LIRR, which we have to get done. And it is going to be right here. You used the diversity of the community as an asset. You have affordable housing. You have walking strategies. You have it all in your plan. So a job well done. It is a well-deserved award and I believe it will turn out to be a great investment for the people of the state of New York. And I am going to congratulate all the people who worked so long and hard to make this dream a reality, because you did. Congratulations.