Yankees and Mets Blow 3 Run Leads to Orioles and Nationals

The Yanks and Mets both started out strong with their aces on the mound last night, but ultimately fell to their division rivals. 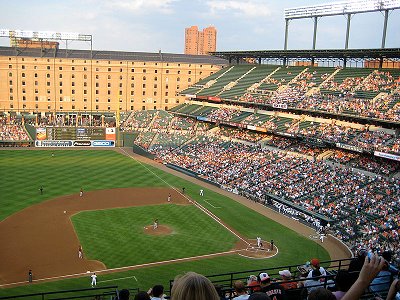 The Yankees finished their latest home stand with a series against the Texas Rangers. Hiroki Kuroda took the mound for Game 1 on Tuesday, working through the first two innings with ease before giving up a homerun to Leonys Martin in the third. The Rangers went up 2-0 when they scored off a groundout in the fourth, before Travis Hafner smacked a homer to cut the deficit down to 1  in the bottom half of the inning. Texas went up by 2 for a second time when Martin hit his second homerun to start the fifth, but Brett Gardner did the same to make it 3-2 in the bottom frame.

Jayson Nix followed the trend of lead-off homeruns to tie the game in the sixth, providing the last burst of offense either team would see until the ninth. Mariano Rivera came on to pitch the ninth, but with the game tied was not in position to pick up a save as he worked a scoreless inning. Ichiro Suzuki, who came on with two outs and no one on base, put an end to the game when he struck a towering solo shot to put the Bronx Bombers up 4-3, giving the team and Rivera the win.

Lyle Overbay put the Yankees ahead early on Wednesday with a homerun in the bottom of the second. Unfortunately that lead did not last long, as Andy Pettitte allowed two runners to reach safely to start the third, and a Nix throwing error loaded the bases. Pettitte proceeded to give up 2 two-run doubles in a row, putting the Yanks down 4-1.

New York began to battle back in the sixth, starting with a Gardner single and Ichiro double. Cano brought Gardner home with a single, and Hafner batted in Ichiro to bring the score up to 4-3.  The Rangers went back up by 3 when Nelson Cruz hit a 2-run homer off Joba Chamberlain in the seventh, but Suzuki mirrored that performance when he returned to the plate in the bottom of the inning, bringing the Yankees back within 1. Both teams went scoreless in the eighth, but former Yankee Lance Berkman widened the gap with the first of two Texas runs in the ninth on an RBI single. The Rangers won 8-5.

Phil Hughes gave a masterful performance during Thursday’s rubber game, pitching eight strong innings to completion. The only blotches on his record came in the third, when he gave up a sacrifice fly to Ian Kinsler, and the fifth, which Jurickson Profar kicked off with a solo shot. Despite Hughes’ great showing, however, the Yanks would lose the game and the series as they were unable to provide their pitcher any run support. New York lost 2-0 and Hughes fell to 3-7 on the season.

The Yankees gave CC Sabathia an early lead when they returned to Camden Yards last night. Cano singled in a run in the first, and Vernon Wells and Chris Stewart contributed RBI singles in the third to go up 3-0.

For his part, CC carried a no hitter into the sixth inning, but allowed 3 runs on 4 hits to tie the game once there. After getting the first two batters in the seventh out he gave up a homerun to Nate McLouth, putting the Orioles up 4-3. That score held, as the team failed to rally in a game they once lead 3-0.

Now trailing Boston by 5.5 games and Baltimore by 2, the Yankees will try to gain ground at 7:15 PM tonight.

After dealing some heavy blows to a pair of division rivals, the Mets traveled to Chicago for two interleague games against the White Sox. They took an early lead on Tuesday, as a Marlon Byrd sacrifice fly and a Josh Satin single put them up by 2 in the first inning. With newcomer Zack Wheeler on the mound, Chicago cut the lead to 1 with a run-scoring groundout in the bottom of the inning, then homered to tie the game in the third.

Andrew Brown put the Mets back on top when he turned the first pitch he saw in the fifth into a solo homerun, but the White Sox scored 2 runs in the bottom half on a groundout and a sacrifice fly, taking a 4-3 lead. Wheeler was spared the possibility of his first Major League loss when a fielding error on a Daniel Murphy hit in the ninth gave David Wright the opportunity to score, tying the game at 4 apiece. Unfortunately, LaTroy Hawkins gave up a walk-off RBI single to Alexi Ramirez, giving Chicago a 5-4 win.

Hoping to tie the short series, Shaun Marcum gave an unusually strong showing on Wednesday night. After 4 scoreless innings, the team gave him a lead to work with in the fifth. Juan Lagares reached base on a fielding error which also allowed Josh Satin and Andrew Brown to score, and came home himself as an Eric Young single put the Mets up 3-0. Marcum continued to work through the White Sox order, pitching 8 complete innings before turning the ball over to Bobby Parnell, who in turn earned his 13th save as Marcum picked up his first win of the season.

Before coming home to resume playing against their division, the Mets stopped off in Denver to make up for a game against the Rockies that had previously been rained out. Colorado took an early lead when they worked 2 runs off Jeremy Hefner on a sac. fly and groundout in the second inning. Hefner took it upon himself to put New York on the board when he grounded into a force out in the fifth, reaching safely as Anthony Recker was thrown out at second and Zach Lutz came home to score.

Down 2-1, Hefner was still in position to take the loss in the eighth inning when, with Murphy on first, Marlon Byrd slammed a homer to put the Mets up 3-2. The hit spared Hefner the loss, put Hawkins in position for a win, and allowed Parnell to earn his 14th save.

The Mets returned home to start a series with the Nationals last night. Matt Harvey retired the first 14 batters he saw en route to an 11 strikeout performance. He gave up a homerun in the fifth inning, but Wright had already scored on an error in the fourth, and a Byrd RBI double and Satin RBI single combined to put New York up 3-1.

Harvey stayed on to pitch seven complete innings, lowering his ERA to a National League-best 2.00 in the process, and Satin tacked on an RBI double in the bottom of the seventh to give the Mets a 3 run lead. That score did not hold, however, as Washington hit New York’s bullpen for 3 runs in the eighth and 2 more in the ninth, taking a 6-4 lead which the Mets could not overcome. Parnell picked up his 4th loss as Harvey had to settle for his 9th no-decision.

The Mets will try to make up for the loss at 1:10 PM this afternoon, and will finish the series at the same time tomorrow.