Jesse Santucci, 42, was driving while impaired by a combination of fentanyl, morphine, Suboxone and Neurontin, officials say. 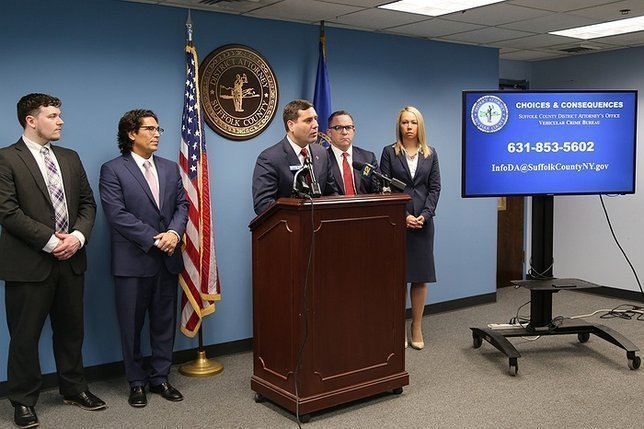 Suffolk County District Attorney Timothy D. Sini announced the conviction of a Centereach man for striking and killing a pedestrian in Nesconset on Sept. 29, 2018, while impaired by a combination of drugs.
Jesse Santucci, 42, pleaded guilty today to Vehicular Manslaughter in the Second Degree, a D felony, and Driving While Ability Impaired by the Combined Influence of Drugs, an unclassified misdemeanor.
“Anytime you get behind the wheel while impaired by drugs or alcohol, you are putting lives at risk,” District Attorney Sini said. “There is no excuse for this reckless, dangerous behavior. Today’s conviction holds this individual responsible and serves justice for the victim and his loved ones.”
At approximately 8 p.m. on Sept. 29, 2018, Santucci was driving a 2018 Audi A6 northbound on Rosevale Avenue in Nesconset when his vehicle struck a pedestrian walking northbound on the shoulder of the roadway. The victim, Kevin Hartnett, 26, of Ronkonkoma, was transported by Nesconset Rescue ambulance to Stony Brook University Hospital in critical condition. He succumbed to his injuries on Oct. 1, 2018.
Santucci was arrested by the Suffolk County Police Department following the crash. A blood test revealed that Santucci was driving while impaired by a combination of fentanyl, morphine, Suboxone and Neurontin. He was also in possession of THC oil.
Santucci is scheduled to be sentenced by Suffolk County Acting Supreme Court Justice Fernando Camacho on August 22.
This case is being prosecuted by Assistant District Attorney Raymond Varuolo, of the Vehicular Crime Bureau.