Encountering Nature – and Death -- At The Old Inlet Breach. 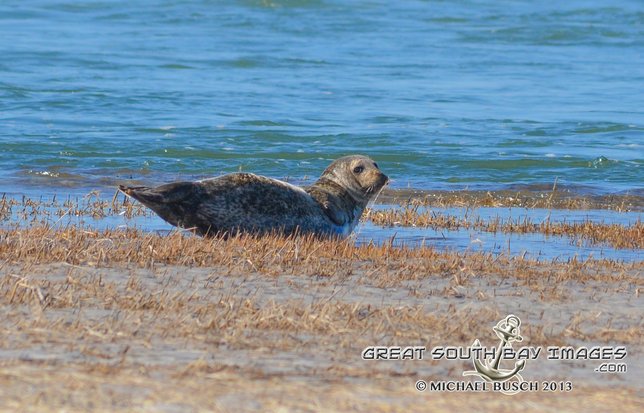 Growing up on the Great South Bay, I have always been interested in sea life and marine mammals. I’m 31 years old and have spent most of those years fishing with my father on his boat. This is why I believe firmly that it needs to be protected from pollution. Over the last twenty-plus years, I have seen the bay become increasingly brown and dirty.

After Superstorm Sandy, I found a Facebook Page called Save the Great South Bay. The group was formed just ten weeks before Sandy hit Long Island, and they too shared my love of the bay and the desire to try and address the pollution that was slowly killing it. I knew there was a breach in a part of Fire Island called The Otis Pike High Dunes Wilderness Area, which is about two miles west of Smith Point, opposite Bellport.

Searching for photos of the breach, I found this group. Since joining the Save The Great South Bay Facebook Group, which now has almost 700 members, I have taken 5 trips to the breach on foot from Smith Point to witness firsthand what I had only seen in pictures – clear, clean ocean water flowing into Bellport Bay with the incoming tides, and stagnant brown water flowing out.

Over the months, and with each visit, I have seen the color of the bay go from brown to turquoise. I have seen osprey, seals, piping plovers, seabirds and fish in abundance. A number of sandbar islands have formed, with Pelican Island where the seals ‘haul out’ at the center of it all.

Three of the five times I have visited the breach I have seen these seals. Unfortunately, the last time I visited the breach I spotted a dead seal washed ashore, decapitated, still bleeding from the stump where its neck was, with deep wounds on its carcass. I immediately took photos and reported this to the National Park Police. The National Park Police then transported the seal to the Riverhead Foundation for Marine Research and Preservation (A not for profit organization whose primary mission is to preserve and protect our marine environment through education, rehabilitation, and research) where the seal was examined by marine biologist Kimberly Durham, the Rescue Program Director.

The photos of the seal I posted on Facebook led many to speculate that a great white had decapitated the seal and killed it. It didn’t help that many of us are lovers of the movie “JAWS”, and that this was near the movie’s fictional setting. With all the seals, could the Great Whites be far behind?

As this episode proved, it was best to leave science to the scientists. After Kimberly Durham’s excellent forensic report it was revealed that the cause of death was not shark related, but was “acute.” The seal had been perfectly healthy until it met its demise, but the cause of death was undetermined. The body wounds were consistent with scavenger “damage from large predatory fish species such as bass, weak or blue.” Troubling to me is that it cannot be ruled out that a human caused this seal’s death.

All too often you hear about seals, dolphins, manatees, whales, and various other marine mammals tangled up in nets, sickened by pollution, weakened by a loss of food supply, or run over by a boat. Sometimes fisherman with a tangled seal will cut the head off because he does not want the seal to damage his net. This is a selfish act. We are using their waters and we should do so carefully and humbly. It is why we all should be doing our part to revitalize, protect and preserve all that the Great South Bay and Fire Island offer us.

For a week now, the fate of that seal has been on my mind. How? Why? It has made me even more committed to protecting the waters around us, and the creatures that call The Great South Bay home. I like to think that the seal did not die in vain.

When you're out enjoying the beach this summer, be sure to keep an eye out for any injured wildlife. If you come across a seal, or other marine mammal that's been injured, be sure to report it to the National Park Rangers, or the Riverhead Foundation for Marine Research & Preservation:

This Guest Post is brought to you by Michael Patrick, on behalf of Save the Great South Bay, and does not necessarily reflect the views & opinions of LongIsland.com and its staff.