Hands-On with the Galaxy Note Pro 12.2, A Large Tablet with a Penchant for Productivity

The Galaxy Note Pro 12.2 is substantially larger than the average tablet, but might be the right fit for those who want to get some work done on their devices. 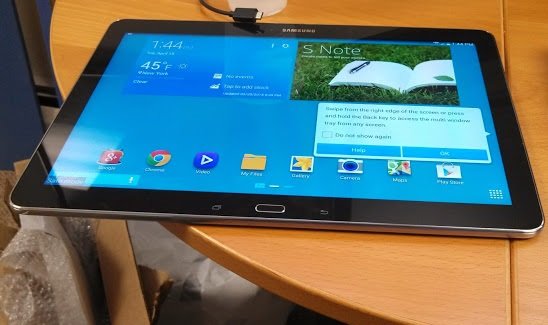 A 12.2” tablet screen is not something you’re likely to encounter every day; evidently that hasn’t stopped Samsung from trying to blur the line between what can be considered normal for a tablet and a small laptop. The newly released Samsung Galaxy Note Pro 12.2 is a slate as large as its name, but while the moniker is a bit of a mouthful, the tablet itself weighs in at a surprisingly comfortable 1.65 pounds and features a soft faux-leather back.

At 12.2”, the largest of the Note Pro family is also pushing the limits of the transportability which makes smartphones and tablets the functional gadgets that they are, but what it shirks in portability it makes up for in productivity. That massive screen serves to truly highlight Samsung’s suite of productivity apps, including software like Hancom Viewer (a handy app for editing documents) and e-Meeting (an app for conferencing).

The S Pen stylus and its corresponding apps which Note users have come to know and love make an appearance as well, including Action Memo (for quick notes), Scrap Booker (for easy screen-caps and collecting articles or videos), and Screen Write (which allows you to write on the screen and capture the resulting image).

Samsung’s real shining star here, however, is Pen Window, which allows users to draw a window to their desired size and open a new app on top of an already running application (perfect for when you want to read a chapter of A Clash of Kings while waiting for your troops to populate in Clash of Clans). Opening multiple windows at once is still a rare ability in the tablet world, and the Note Pro 12.2’s capacity for running four apps at the same time gives it an edge over many of its competitors; of course actually being able to use all four windows at once would not be particularly easy without that large display. 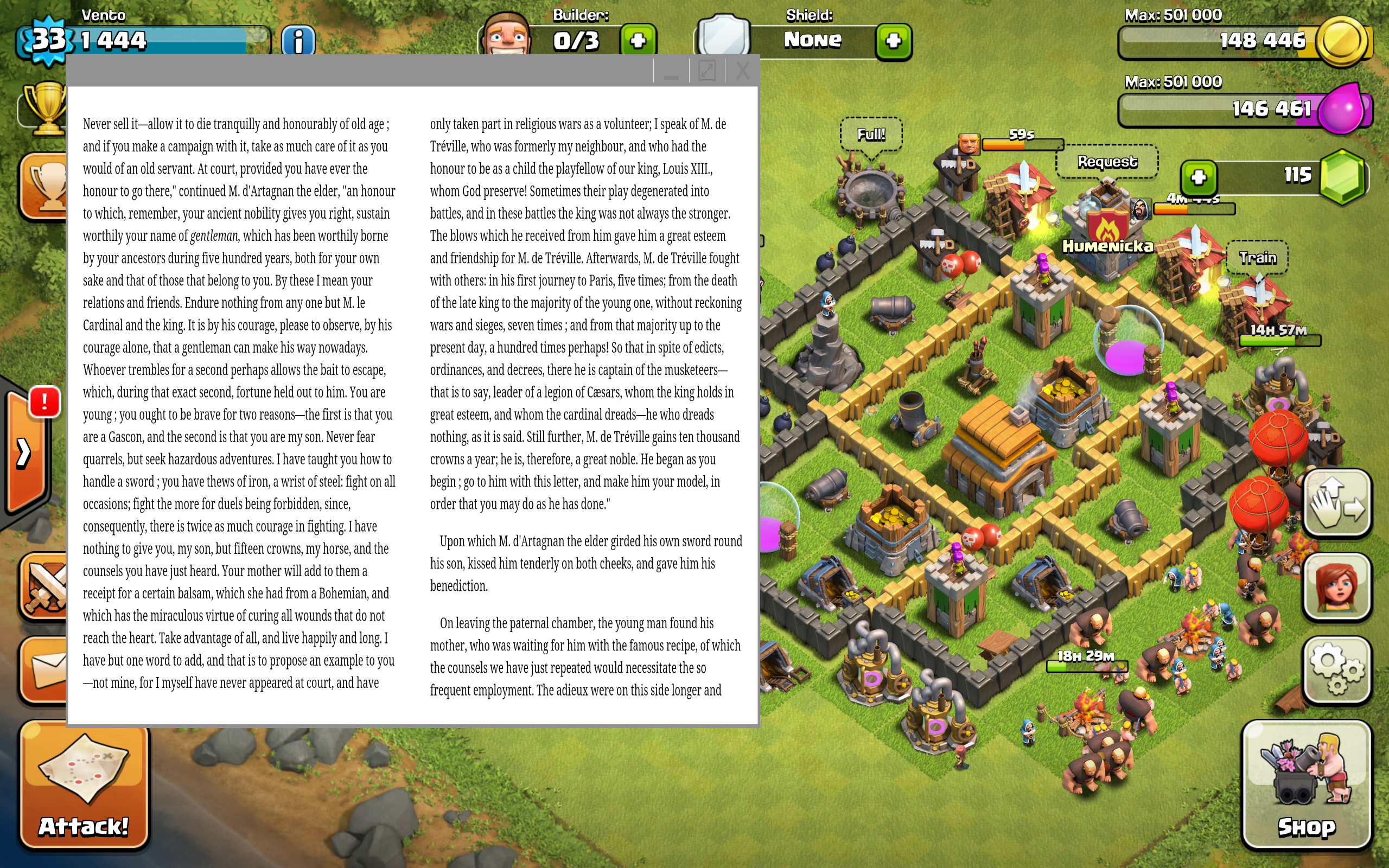 The long screen is good for more than simply editing a document, housing your Twitter feed, and letting you post on Facebook simultaneously; it also has allowed Samsung to equip the device with a full-size on screen keyboard. Touchscreen keyboards can be difficult to work on, abandoning keys a traditional laptop or PC would almost always have at its disposal in order to fit on the screen, and forcing the user to try and tap on the exact space they intend to change when trying to edit a previously mistyped word.

Thankfully, the larger keys on the Note Pro are a fair bit easier to type with, making mishaps all the less likely, and there is even room on the screen for directional keys. That might seem somewhat trivial, but when you realize that you made a typo three lines up and in the middle of a long word, pinpointing the letter you want to change is a lot easier with a set of arrows than by attempting to tap on just the right spot with your index finger.

Further fueling the Note Pro’s potential as a productivity tablet, Samsung has given it the ability to remotely access your PC or Mac. The setup is actually relatively simple—download the corresponding program on to your computer, launch the app on the Pro 12.2, enter an authentication key, and you’re as good as synced. Anyone with a Netflix account has likely gone through a similar process at some point.

Once the mirror is established, you can use your Note Pro to control your PC. This might not be the most useful feature when you’re sitting at your desk, but it’s perfect for when you want to view a photo gallery on your home computer from a different room, or if you forgot to print an important file from your work desktop before heading into a meeting.

When you need to kick back and relax, the Note can still be a handy tablet; its 2560 x 1600 pixel display is perfect for media consumption—including the aforementioned Netflix or any other video service—and the device has the power under the hood to run it all smoothly.

Samsung’s behemoth of a slab ships with Android KitKat 4.4 and the latest version of the company’s TouchWiz user interface (a necessity to make the S Pen functional and enable many of the apps which make the Note so unique). 3 GB of RAM and an Exynos octa-core processor power the tablet, while potential purchasers are given an option for 32 GB or 64 GB of built-in storage as well as a microSD slot for expandable memory. 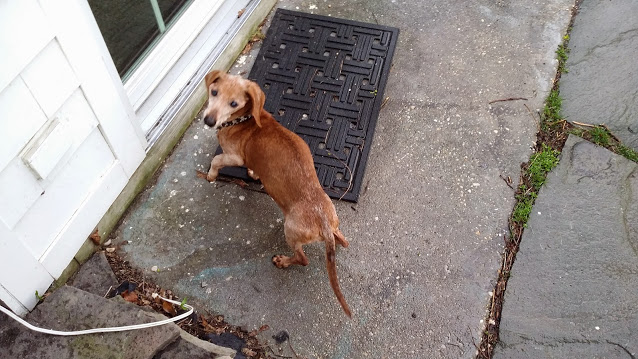 A 2 mega pixel front-camera and 8 MP rear shooter allow for respectable picture quality, though you may feel awkward trying to snap a photo with an 11.5” wide tablet in your hand. If you have a phone or a dedicated camera with a better lens, you’ll likely want to stick to one of those.

The new Note comes with a 9500 mAh battery, which is quite necessary in powering such a large display lasts a respectable length of time (I got a full day out of it with what I consider moderate-heavy use, but your mileage will vary). A fast-charge cable allows owners to speed up the charging time on such a large battery substantially, and Samsung has developed a rather ingenious charging port which can accept their proprietary charger or a micro USB cable. Using the generic micro USB option will lengthen the time needed to fuel up, but it gives owners an option to cut down on the wires they have laying around their houses’ outlets.

WiFi only models are available, and 4G-enabled versions are also available exclusively on Verizon Wireless’ network through most of Spring. Given the Note Pro 12.2’s business-oriented capabilities, the 4G option may be a smart choice for those planning to use it for work-purposes on the go.

With a host of features and an impressive penchant for productivity, the Galaxy Note Pro 12.2 could be the right solution for Android users looking to leave their laptops behind. A starting price of $750, however, may make prospective buyers want to think hard about picking one up, as the same sum is enough to purchase a cheap netbook and smaller tablet. This device is likely best suited for someone who will be using it frequently, and will find having just the one machine to carry more convenient than a separate laptop and tab.

Below: Photos and screen shots taken by the Galaxy Note Pro 12.2