A 14 year old boy and a man in his 20s were both injured when a man outside of the rink opened fire on the skaters, sending the crowd into a frenzy. 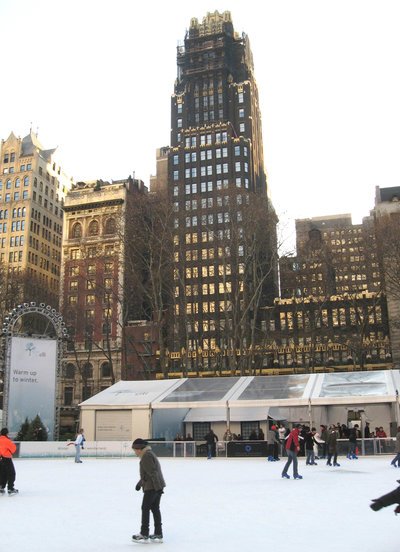 As of Sunday morning, the search is still continuing for the gunman who opened fire at an ice skating rink in Bryant Park, wounding two men.

Three shots were fired shortly after 11 p.m. on Saturday night, hitting a 14 year old boy and a man in his 20s. The injuries are not believed to be life-threatening, but the teenage boy who was shot in the back may be paralyzed.

“He took out a gun and was scanning for him with his eyes, and then he shot him three times and ran,” said one skater to the New York Times. “People around me fell to the ice. I fell down, too. Then I got up and ran to the railing like everyone else.”

Though the teenager’s name has not been officially released, multiple reports and interviews have identified him as Adonis Mera of Manhattan.

The skater said that the shooter was among the tourists who were taking pictures on the side of the rink.

There were more than 50 skaters on the ice when the shots were fired, and many dropped to the ice or fled from the rink, some still wearing their skates, others carrying their skates and running through the holiday shops in just their socks. Some tried to rush out through the skate rental tent, but were slowed down when they were asked to present their tickets to claim any belongings kept in lockers.

The rink reopened on Sunday morning, but police are still searching for the gunman.

Bryant Park’s ice skating rink is a popular attraction in Manhattan, and is the city’s only free skating venue.  Bryant Park also has relatively low crime statistics compared to the rest of the city.