Experts Agree: Too Much Tablet Use Could Harm Kids

Experts agree that continued exposure to screen technology could impede learning or brain development in children. 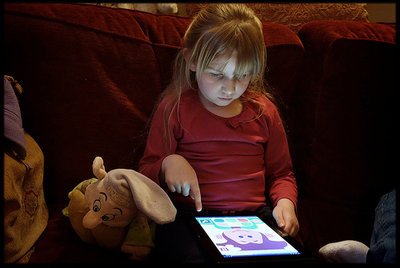 Although iPads have only been on the market for a little over three years, manufacturers are already finding ways to incorporate the wildly-popular technology into products designed for infants.

A recent Education News article reported that although there’s very little research regarding the effects of tablet use on children, experts agree that continued exposure to the devices could impede their learning or brain development.

They point out that while no educational or developmental benefits have been found for babies and toddlers from continued exposure to screen time on either TV or tablets, activities that do promote brain development, such as non-electronic toys and adult interaction, are taken away by this screen time. Experts have also linked too much screen time to behavior problems and delayed social development in older children.

Dr. Rahil Brigg, a pediatric psychologist at New York’s Montefiore Medical Center, says that although experts still don’t know how much screen time is too much, exposure to it needs to be limited for the youngest of children, since too much time behind screen technology can slow language development.

Brigg also says that too much tablet time may slow social development in older children. The solitary nature of the activity, she points out, keeps kids from developing vital social skills, such as making new friends and responding appropriately to social cues.

Dr. Dimitri Christakis, a pediatrician at Seattle Children’s Hospital, says that while there is some value to educational games and apps that engage children and prompt them to interact with their devices, if all children do is watch videos on their tablets, then it’s just like watching TV, which has a limited ability to engage a child.

“The single most important thing for children is time with parents and caregivers,” Christakis says. “Nothing is more important in terms of social development. If time with the tablet comes at the expense of that, that’s not good.”

While pointing out that the more children absorb and understand technology before they start school, the more comfortable they’ll feel when they enter a classroom for the first time, Jill Buban, dean of the School of Education at Post University in Waterbury Conn., cautions that use of even the best educational apps should be limited to 30 minutes at a time, given the short attention spans of most young children.

“There’s so much media out there and so much marketing,” Buban says. “It’s all about smart choices and research, whether it’s an app on a tablet or a TV show.”

Susan Linn director of the Campaign for a Commercial-Free Childhood, warns parents to beware of claims about the educational value of TV shows or apps for babies or toddlers, since science has yet to prove they provide any positive benefits.

“Babies and young children are spending huge amounts of time with screen media when really what they need is hands-on creative play, active time and face-to face time with the people that love them,” Linn said.

“The best toys are the ones that just lie there until the child transforms them,” she continued, pointing to blocks and stuffed animals as examples. “If all children do is push a button, that’s not the kind of play that promotes learning.”