The S5 might be considered a relatively minor upgrade in terms of specs, but brings with it several noteworthy new features. 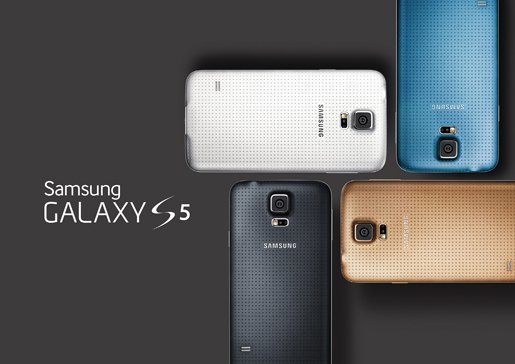 Samsung is one of the most popular and commercially successful manufacturers of smartphones in the world, and yesterday the company announced a new entry in their flagship line of Galaxy S phones during the Mobile World Congress held in Barcelona.

The new Galaxy S5 is in some respects a relatively minor upgrade from last year’s S4 model. Screen size has grown a modest tenth of an inch form 5” to 5.1”, and the screen remains capable of full 1080p HD video with a resolution of 1080 x 1920 pixels. The front camera has received a slight upgrade from 1.9 megapixels to 2.0 MP, and the rear shooter has improved from 13 MP to 16 MP. Battery life has grown to 2800 mAh, which isn’t quite as high as Motorola’s Droid MAXX, but still beats out the S4 by 200 mAh for an extra boost of power. Additionally, a new “Ultra Power Saving Mode” shuts down unnecessary features and switches the display to a black and white in order to conserve battery life when enabled.

Both the S4 and S5 are powered by quad-core processors with 2 GB of RAM, and have a microSD slot for expandable storage, though the S5 looks like it will only have a 16 and 32 GB option. The S4 also has a 64 GB variant to round out its lineup, but Samsung has stated the S5 will be compatible with recently-announced 128 GB microSD cards, providing a hefty storage option for those who keep substantial amounts of media or other large files on their mobile devices.

While the guts of the Galaxy S lineup may have only received a relatively minor upgrade, there are several software and hardware changes to help differentiate the new flagship from the old.

Android purists will be happy to know that in addition to launching with Version 4.4.2 (KitKat), the S5 will be running a toned down “TouchWiz” UI which promises less bloat and fewer Samsung-specific programs than in generations past. Power users have often complained that Samsung’s heavily customized flavors of Android have bogged its phones down and given owners less potential for customization than competing handsets, but the dialed-back S-features will hopefully free up a little extra storage for those picking up the S5.

“With the Galaxy S5, Samsung is going back to basics to focus on delivering the capabilities that matter most to our consumers,” said JK Shin, President of Samsung’s IT & Mobile Communications Division. “Consumers are looking for mobile tools that inspire and support them as they improve their everyday lives. The Galaxy S5 represents an iconic design with essential and useful features.”

The phone will certainly still come with several of Samsung’s own Apps, however. Among them, S-Health 3.0 will give users a personal health, fitness and food monitor, working in conjunction with the device’s pedometer and heart rate sensor. A finger scanner has also been added to the handset, and can be used to unlock the phone’s screen and to secure mobile payments.

A “private mode” has been designed to lock photos and data through the use of the fingerprint scanner, and a “kids mode” is built in to limit access to apps and information when parents allow their children to play with their phones.

In addition to its increased focus on health and wellness the S5 will be slightly more durable than its predecessor, being built with a dust and water-resistant coating with a protective tab to keep water out of the micro-USB port. Samsung has described the back cover of the phone as “leather-like,” made from a similar polycarbonate blend as the existing Galaxy Note line. Those shells were given a bit of a metallic look and will be available in multiple colors (black, “shimmery” white, “electric” blue, and “copper gold” options have been revealed thus far).

The new Galaxy S5 will begin hitting store shelves on April 11, giving prospective buyers a little over a month to weigh their options before diving into Samsung’s latest.