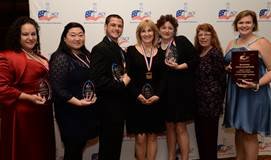 “After coaching different teams for five years with varying degrees of success, I was so elated for this team,” said Glick.  “I don’t have a tally for how many hours we spent together practicing and studying, and I couldn’t begin to tally the hours they spent studying alone. Their dedication and hard work really paid off with the best prize of all—a trip to the 2014 ACF National Convention and a chance to compete against the best of the best.”

The Baron H. Galand Culinary Knowledge Bowl, created in 1992 and sponsored by American Technical Publishers, is a “Jeopardy”-style culinary competition named in honor of past ACF national president Baron H. Galand, CEC®, AAC®, HOF. Galand was a champion for junior members and encouraged them to get involved in their profession outside the kitchen. ACF knowledge bowls are open to junior culinary teams from ACF chapters, apprenticeship programs and accredited schools. Competition questions are drawn from five nationally published textbooks for culinary professionals that cover topics such as nutrition, safety and sanitation, and the art of modern cooking.