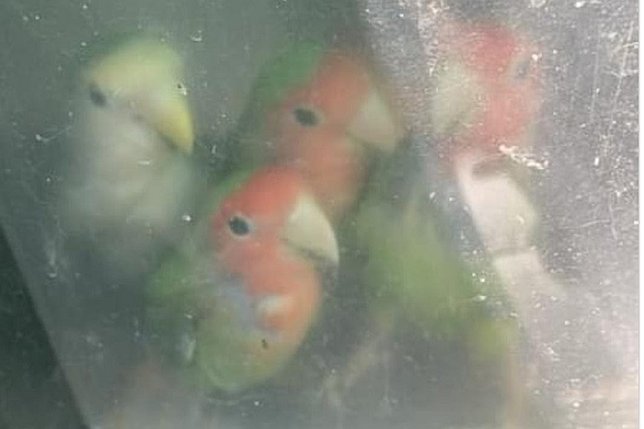 The Suffolk County SPCA is offering a $2,000 reward for information leading to the arrest and conviction of the individual(s) who abandoned birds on the Northern State Parkway.

On Saturday March 20th at approximately 12:15 pm, an animal rescuer was driving eastbound on the Northern State Pkwy just past exit 40 (route 110) and saw a man in a silver SUV, possibly a Nissan Pathfinder walking from his car to the woods with a cage in his hand. When other rescuers arrived, they found a small white bird cage with the top off as well as a large bottom part to a big cage with bird food on it and pieces of a cage dismantled on the ground. They reported hearing parrots and possibly love birds "screaming" in distress and saw several flying in the trees in the immediate area. One flew close enough to a rescuer who was able to reach out for it and put it back inside the cage. Additional rescuers arrived with cages and nets to assist.

For the next 2 hours the rescuers we were able to bring 4 more birds back to safety inside the cage. Another bird was struck and killed by a car on the parkway.

They went back early Sunday but no other birds were found nor was the food in the cage touched.

Roy Gross, Chief of the Suffolk County SPCA, said that animal cruelty will not be tolerated in Suffolk County. Abandonment of animals is a misdemeanor punishable by imprisonment for up to a year and/or a fine of not more than $1,000. If anyone has information about who may have dumped these little birds, they are asked to call the Suffolk County SPCA at 631-382-7722.