Today, Monday, March 28th, marks the 3rd anniversary for Bruno, the last dog to leave the Nassau County Emergency Pet Shelter (see story below) that was set up after Hurricane Sandy. 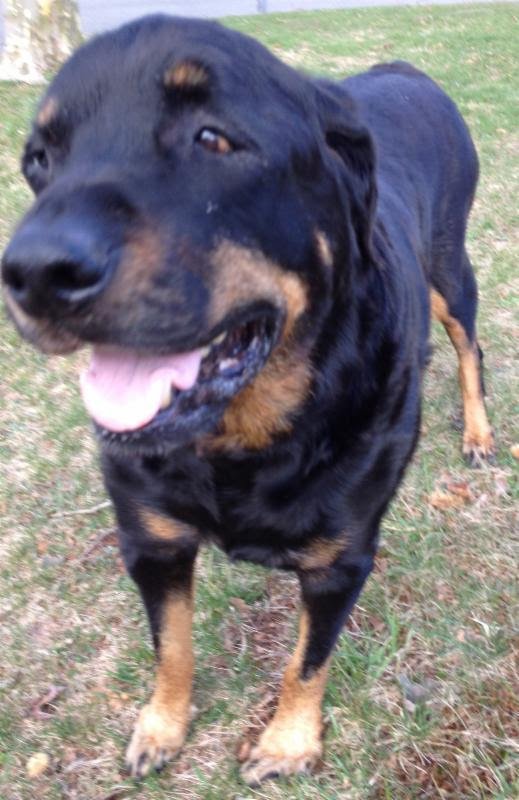 Congratulations to Sandy Survivor Bruno, the last pup to leave the Nassau County Emergency Pet Shelter after Hurricane Sandy, on celebrating three years with his forever family the Siegels of Melville!

The shelter was open for four and half months, and at one time held over 500 different pets, primarily dogs and cats. It was superbly run by various group humane organizations, among them a group of dedicated volunteers from the Nassau County SPCA and our Pet Safe Program.

Bruno was incredibly frightened, and had a very tough time adjusting to life at the shelter after being ripped from his home. At one point during his stay at the emergency shelter, it was recommended by an animal behaviorist that he was unadoptable, and should be euthanized.

Fortunately for Bruno, that was never a consideration. A group of the remaining staff at the emergency shelter, including Robert Sowers of Nassau County SPCA , along with others from the Pet Safe work endlessly to bring the best out of Bruno, proving against the recommendation, and against all odds, that Bruno deserved a chance at a new life.

He was adopted by Karen & Marc Siegel and has enjoyed a wonderful, loving life at their home in Melville, Long Island. Happy Anniversary Bruno!

And special thank you everyone who never gave up.

Nassau County, NY - March 14th, 2013 - In its 40 year history, the Nassau County SPCA has seen its share of heartwarming adoptions and heart-stopping rescues, but its current quest, with Pet Safe Coalition and HUG to find a home for the last of its Sandy survivors may be one of its most heartbreaking.

Bruno, an adult Rottweiler with a face that could tell a thousand tales, is facing an uncertain future as the Mitchel Field Emergency Pet Shelter prepares to close its doors and Bruno's former owner made the difficult decision to relinquish him to emergency shelter care.

When Superstorm Sandy hit the East Coast in late October 2012, no one could predict that the lives of those affected would remain in such desperate upheaval into the following year. Residents of Long Beach, New York's small barrier island, remain without sewage, gas or electricity for weeks and homes there have been devastated by mold and decay. Bruno and his owner, Christopher, were two such residents who fought the storm together and survived, submerged in water and left homeless in the days that followed.

Nassau County's Emergency Pet Shelter, an abandoned former gymnasium at Mitchel Field, was a saving grace to Bruno, along with over 500 other family-owned pets in need of shelter and care while their owners took time to pick up the pieces and rebuild.

Unfortunately for Bruno, Christopher's situation only worsened as the canine's weeks in the emergency shelter turned into months. Christopher lost his job and struggled to find a new place to live that allowed for Rotti companions.   Desperate for work, Christopher took a job outside of New York and was able to visit with Bruno less and less frequently.

Now, as Mitchel Field Emergency Pet Shelter makes preparations to shut down, Bruno, is its very last resident, has to face a challenge bigger than any nature could throw at him. The dog's owner, Christopher has decided to say goodbye to his longtime furry friend and Nassau County SPCA workers are heartbroken at the prospect of sending not sending Bruno to a new home life.

"Bruno is a devoted dog," stated Gary Rogers spokesperson for the Nassau County SPCA. "He has a strong and sometimes stubborn Rottweiler personality that would fit best with an owner who understands the breed, but he becomes a loveable puppy around the people he really knows and trusts. He has had a very difficult last few months and we are desperate to find him a happy ending."

If you are interested in adopting Bruno, can provide foster care for a short period of time, or for more information, please contact Nassau County Emergency Pet Shelter at: 516-272-0017, or email emergencypetshelter@gmail.com.