Traffic Made Me Do It: Day 4 Of My LI Beer Tour

Day four of my Long Island Brewery Adventure didn't go as planned -- but ended up being great, anyway. 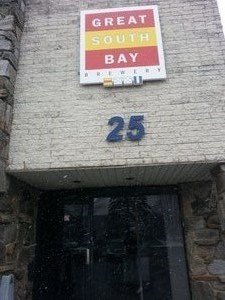 Thursday ended up being a lot more hectic for me than I had intended. The plan was originally to meet up with some friends at Croxley's of Franklin Square and press on to Barrier Brewing in Oceanside. The first part at Croxley's went off without a hitch. A few buddies and I had a beer and some delicious ten cent wings. Croxley's is a Long Island craft beer mecca, with six locations and a downright intense line-up of draft beers at each one. I figured it would be good form to keep my beer selection local, so I went with the Massive IPA from Great South Bay Brewery. Little did I know I'd be visiting their brewery later that afternoon.

I drove down to Oceanside after, and was met with disappointment at the door of Barrier Brew due to some scheudling problems. Bummer. I spoke with Craig from the brewery, and we are hoping to reschedule for when I am still around. We shall see. While I was in the area, I noticed a lot of the damaged businesses left over from Sandy's wrath last fall. I even acted on impulse and drove down to Long Beach to see the famed boardwalk which is no longer there. It was a distressing sight, to say the least. It's important to remember how hard this storm affected our fellow New Yorkers, and the incredible resilience that has been shown by all who were so badly impacted. I wish them all the best and I hope this season is far kinder. May we all know what normal feels like again soon, when the tourists and their brightly colored umbrellas return to all of Long Island's seaside havens.

I drove back up to the Southern State from Long Beach and came face to face with a wall of traffic. Rush hour. What a mess, especially with some flurries limiting visibility. As I sat in traffic, slowly losing my mind, I remembered that the Great South Bay Brewery recently moved to a huge facility in North Bay Shore, which wouldn't be far from me once I crossed over into Suffolk County. Why not pay those folks a visit? So I did.

The Great South Bay Brewery is located in a huge warehouse right off of Fifth Avenue in Bay Shore. The surrounding area is predominantly industrial, fitting in nicely with the trend I had established on Wednesday. These guys are onto something big, however. Take a look at my blog post about the rise of local beer, focusing on my experiences at GSBB. The brewery has a largely custom-built 30 BBL brewing system coming online in the next few weeks. This means that Head Brewer Greg Maisch will soon be bringing his entire operation in-house, as opposed to relying on an outside contract brewery. This is big news for local craft beer, as this will make Great South Bay into a production player on the island. Looking around the massive 39,000 square foot warehouse, it isn't hard to see that these guys have intentions to grow, and grow rapidly.

Let me talk a bit about the beer: it's fantastic. I began with the Sleigh Ryed WInter Ale, which was accidentally on tap. This worked out to my benefit, though, because I enjoyed it. The recipe included about 20% rye in the grain bill, as well as a whole bunch of German Crystal malt. It was hopped with Cascades, although there is only a limited hop character to the beer. The brewers were aiming orginally for a red rye ale, but the color is close to brownish amber with an off-white head. It's smooth with a solid rye character at the finish. At 6.6% you'll need more than a single pint to warm you, but you shouldn't mind. And with winter stubbornly holding on around these parts, that's a good thing. Next on tap was the Blonde Ambition Blonde Ale, ostensibly the brewery's flagship beer. This one is an apricot bomb. It's very sweet, and perfect for the summer, if ever it decides to return to us. If you're a fan of Magic Hat #9, you'll feel at home with this beer. It actually more effectively nails to apricot taste than does that much larger brewery. I was happy about this: the next beer to sample was the Robert Moses Pale Ale. As a student of history, and lover of the Robert Caro biography of Robert Moses called The Power Broker, I was stoked to see a beer named after this problematic Long Islander. The beer had a strong hop character on the nose, certainly making it an American-style Pale Ale. There was a residual bitterness in the flavor, provided by an abundance of cascade hops. Coming in at just over 5% alcohol, it's light and refreshing. The Blood Orange Pale Ale is the same beer with the addition of orange oil, which provides a very strong and savory citrus finish. This is delicious beer. Last for the day was the Massive IPA, which I had at Croxley's and thoroughly enjoyed. It's a super crisp india pale ale, with just the right amount of bitterness to classify it as such. This is a solid example of the style, and I'm please to hear that it won a bronze medal at TAP three years ago.

Overall, Great South Bay Brewery's beers are worthy of the massive new system they are being brewed on, and will certainly be a catalyst of growth for the brewery. I wish these guys success. I am particularly interested in the Bayfest being planned for May 11th on the grounds of the brewery. It looks like a fun time and I'd love to be in attendance.

That's all for now, friends. Be sure to keep up with me today on twitter @InTheNameOfBeer as I visit two of Long Island's most exciting breweries as part of my #LIBrewTrip: Long Ireland in Riverhead and the Greenport Harbor Brewing Company in Greenport. Be sure to read all about my previous adventures right here on LongIsland.com and over at my blog, In The Name Of Beer.