Ten Long Island state parks will have new, uniquely themed playgrounds which will be opened next spring!

Ten Long Island state parks will be sharing $1.35 million from Gov. Cuomo’s New York Works initiative.  The money will be used by The New York State Department of Parks, Recreation and Historic Preservation to build and improve playgrounds. 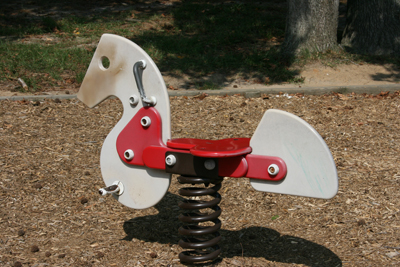 Eight of the ten designated parks will have playground renovations centered around  unique themes.  Belmont Lake State Park in North Babylon will feature a “bug” theme, with the addition of a dragonfly seesaw and butterfly climbing structure.  Bethpage State Park will adopt a “woodland nature” theme for its playground and picnic area, with new ladybug, bee and mushroom climbing structures.  The “wildlife” themed renovations at Heckscher State Park’s playground in East Islip will feature the park’s native deer, fox and osprey.
Hempstead State Park will be transformed into carousel-themed playground with benches arranged in a circle around, mimicking the arrangement of the park’s actual functioning carousel. Hither Hills will get a touch up with it’s new “sea and sand” theme, including a dolphin spring ride and sea creature inlays in the rubberized surface coating.  At Montauk Point State Park, young patrons will enjoy a new ship’s bow feature and functional telescope.
A “maritime” theme will be applied to the playground at Orient Beach, and a new seahorse spring ride and sailboat sandbox will be added.  Valley Stream State Park will be renovated with a “stream” theme, with colorful blue and green installations including turtle-shaped climbing features and spring rides.
The two other parks, Brentwood and Sunken Meadow, will have new playgrounds installed to feature a “soccer” theme and “animal habitats” theme respectively.  Sunken Meadows’ new playground will be complete with a bird’s nest and hollow log play features, which are to be installed near the Field 4 picnic tables.
“It is important that children have a safe and engaging place to play, and these NY Works projects will give them just that in State Parks across New York,” Gov. Cuomo said in a statement. “The numbers tell the story of more and more people visiting the parks, and I encourage everyone to visit these new and improved areas inside the state parks as well as the beauty that New York has to offer.”
"Heckscher State Park is one of the natural gems of not only the 3rd Senate District, but Long Island as a whole," said State Sen. Lee Zeldin (R, C, I- Shirley). "Many of my constituents frequent Heckscher regularly and these improvements to the playgrounds not only improve the safety for the children using them but also provide an enjoyable experience for all.”
In all, the state has plans to renovate or build 50 parks throughout the state, targeting parks with high family visitation.  The new playgrounds are expected to be ready by next spring.  Funding from the New York Works initiative is creating 20 new additional or improved playgrounds in 2014.
Share your thoughts on this article by posting your comment below or visiting our Long Island Living discussion forum.